I have the good fortune to live in a fairly large remnant of what is affectionately called "Bushland" here in south-eastern Australia. In the early 1950's a group of artists decided to drop out of society and flee to the hills northeast of Melbourne, Victoria. The land they could afford was approximately 160 hectares "out-the-back" of a grazing property. The farmer, who by the way passed on a few years ago, thought the land "useless for man or beast". The reason for this "uselessness" is easily explained; the underlying geology is a hard mudstone, the soil is practically non-existent, and the rainfall is low (approximately 500mm or 20 inches). The artists named this place Dunmoochin. The inevitable happened and the artists collective fell apart. The property was split and each of the members took up residency on their own bit. As they either moved on or died their little piece of dirt changed hands. Twenty years ago one of these blocks came up for sale and the opportunity presented itself for me to move in.

The vegetation is a reflection of the soils and the climate; sparse and slow growing, somewhat green in winter and parched, brown and crunchy in summer. Fortunately, these are the exact conditions that a great many geophytes (plants with underground storage organs) like. An impressive list of plants from the orchid, lily and sundew families occur on these dry somewhat forbidding hills. over the years that I have lived here, my neighbour, also a botanist, and I have recorded nearly 55 species of orchids alone! For 160 hectares this is a pretty impressive number, equal to some of the richest areas for orchid biodiversity in Australia.

Today a small group of us went for a walk for a few hours to look at the wildflowers on the "block". This is a regular feature of my life here and not a very onerous task as walking to anywhere on the property takes only a few minutes. We were in particular luck today. The season has been particularly kind in regard to rainfall and the plants have grown and flowered well so far this year.

One of the particularly delightful groups of orchids that occur here are plants in the genus formerly called Caladenia. Caladenia has fairly recently been split into several distinct genera. While there are arguments for and against lumping or splitting Caladenia the fact remains that there has always been several clearly distinct groups within the genus. The Spider Orchids (Arachnorchis) are the show ponies of the group with fantastically large spidery flowers in a wide range of colours sometimes with several starkly contrasting colours in one flowers. Most of the Arachnorchis are pollinated by less than observant male wasps that mistake the labellum of the flower for a female wasp. The fact that the orchid emits a fragrance remarkably similar to the pheromones of the female wasp may explain the lack of concentration of the male wasps.

A second and very small group separated off from Caladenia are the Blue Caladenia (Cyanicula). There are only ten species in the genus Cyanicula most of which occur in south-west Western Australia. In south-eastern Australia we have one relatively common member of the genus, namely Cyanicula caerulea (Tiny Blue Caladenia). Thankfully, this diminutive member thrives in just the conditions that are found here on the property. Well almost. More particularly C. caerulea grows on the hardest and driest of the slopes here and experiences the full blast of the afternoon sun on the northwest facing slopes. The moisture content of the soil on these slopes actually runs at a deficit for most of the year with only a few months in mid-winter to early spring when the top few centimeters of soils become slightly damp. I wouldn't use the term wet as most of the rainfall runs off and there is hardly any soil to hold moisture!

When we were out wandering around today we were actually focused on the valleys as we were looking for Greenhoods (Pterostylis) and Helmet Orchids (Corybus). It was such a nice afternoon we decided to see if the Cyanicula's were flowering. It was near the end of our walk so some of the others did not especially feel like climbing what are in fact very steep hills. I might add that the average age in the group was somewhere north of 50. If only we knew ahead of time what was awaiting us there might have been a bit more enthusiasm! As we neared the top of the slope the shrieks of "I found one" , "I found another one" and "look at these ones over here" rang out so loud that the laggards still in the valley suddenly found motivation and puffed their way upslope. The sight before us was magnificent. Literally hundred of these petite little blue orchids were scattered over the slope either singly or in small groups. The colours ranged from pale ice-blue to a clear dark blue and there was even one that was stark white. The white one may actually be another species, Caladenia praecox but this has to be confirmed. Being all of 5 cm tall it is hard to get a good shot but hopefully the photos below will give you some idea of the beauty of these delightful and remarkably tough little plants. 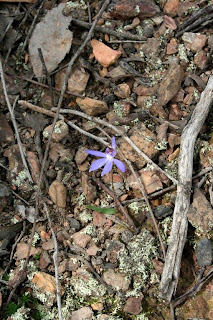 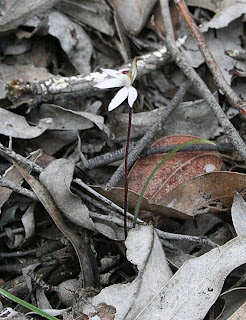 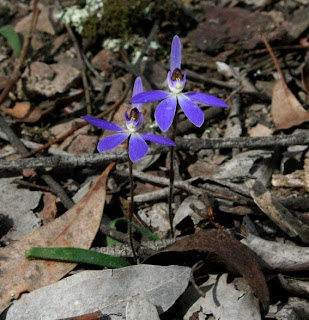 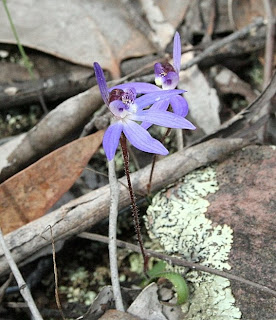 Thank-you again for a wonderful story of Dunmoochin, and the beautiful, fragile Tiny Blue Caladenia – what an incredibly tough and yet delicate orchid!

I wish it was easier to get a larger group shot of the plants. The colour, although vibrant up close, blends into the background of the forest floor. The group shots just look like a barren hillside with a few trees! The habitat picture clearly shows what the ground looks like. Glad you like the post!