Several years ago a friend and I went to a Cymbidium show at Ararat. Ararat is an old town in western Victoria near to the famous Grampians Range. We decided to make a weekend of it as this very pretty little town is about 3 hours drive from where I live. There is nothing worse than arriving at any orchid show more than 1/2 an hour after opening. Get there late and you will totally miss out on the sales bench!

The sales bench at this particular show was, how to say this politely, not all that interesting. My taste ranges into the interesting and unconventional. So many of the plants for sale were 'showbench quality', code for big, round and boring. One of the nurseries was an outfit from New Zealand. Nearly all of the table of this seller was covered in flasks of seedlings with just a small pile of bare root divisions of plants in plastic bags.

I rummaged through the plastic bags and found some very interesting plants. There was a very dark form of Cymbidium Cricket, a primary hybrid between C. devonianum and C. madidum. Cymbidium madidum is a large rainforest species and an Australian native species. There is a picture of C. Cricket in a previous post. In another bag was a plant with the name C. Chiisana 'Geisha Girl' . It was not in flower but owing to the strange mix of Chinese and Japanese names I thought it might be interesting.

Like you do, I grabbed both bags of C. Cricket and the only bag of C. Chiisana. After sorting through the flasks and putting a few aside, it came time to pay. As the money was flying out of my coffers the question inevitably was put to the stall holder 'So what is C. Chiisana?'. He said 'hold on a minute' and turned to the person you should always ask when you don't know something, the wife. 'Is that flower of 'Geisha Girl' still around?' She reached into the rubbish box under the bench, pulled out a scrunched-up plastic bag and after a bit of todo dug out a shrivelled and crushed flower. 'Aw Sh_t, another little brown thing' went through my mind but the money had already departed my possession. I put on my best smile and exclaimed that it looked a very interesting little flower. It is hard to tell quality from a bit of dead plant material.

After a trip home the next day through an unseasonable snow storm, the plants were potted and put in the greenhouse. Cymbidium Cricket, being one of my favourite primary hybrids, got pride of place hanging from the rafters at the far end of the greenhouse. I wouldn't be able to miss them when they flowered the next year. And flower they did! These two C. Cricket obviously liked their new home and nearly doubled in size and flowered beautifully. The C. Chiisana was put on the benches with the other Australian native hybrids. By this time there was the need to find out what this odd plant was. Turns out it was registered in 1989 by a Nakoyama. A Japanese name for a hybridizer is always a good sign that there might be something interesting ahead.

Cymbidium Chiisana turns out to be a hybrid between a small reddish hybrid made in 1961 - Cymbidium Mimi and the Australian native species C. canaliculatum. I thought this might be interesting. I used to grow C. Mimi and although not the most spectacular Cymbidium it was free flowering and had a nice colour. If they used C. canaliculatum 'Sparksii' as the other parent, the progeny would be nice little compact, highly floriforous reds that may be a bit difficult to grow and possibly bloom in the cooler climes of Melbourne. You would think a hybridizer would use a red with a red, wouldn't you?

Well, all seemed to be going along well until there was the need to go to a conference overseas. My partner and I were talking one day on the phone and the question was asked 'was there anything sitting on that upturned pot on the end bench in the upper greenhouse?'. My heart sunk. I kept my specimen plant of a particularly fine form of C. eburneum on that pot to ensure that it got a bit of extra air movement. Nothing more was said until I got home a couple of weeks later. I went for a quick look around the collection to see how the 'Children' had gone while I was away. I started to feel sick the more I looked. Oh no, this couldn't have happened.

It did happen. For the third time since living at my present address I had been robbed. None of the valuables from the house, tv and computer still there, paintings still on the walls. This was much worse. Everywhere I looked there were holes on the benches where plants used to grow. Out came the inventory and down the benches I went recording the babies that were still there. The special C. eburneum was gone. The albino's were gone. The C. insigne were all gone. Aww *@%#, all the natives were gone as well as the primaries involving natives. Cymbidium Chiisana was gone.

Thank goodness, whoever got the plants didn't go through the propagation house. Backbulbs of most of the plants that went west were in the prop house. The Police were called, a list of plants provided, estimated cost tallied. Not a good feeling. I just had to accept they were lost and gone forever. The worst feeling was that whoever stole the plants was someone I knew and someone that knew the value of the plants. They only took the best.

I won't go into how I found out where some of my plants ended up but suffice to say a few of them came back to me. My lovely 20 year old C. eburneum was scorched and shriveled beyond belief and nearly brought me to tears. Some were totally dead. Interesting, C. Chiisana was looking lush and had growths twice the size of the growths it threw under my care. I thought, oh maybe it likes it a bit drier. There had to be some knowledge gained from this whole sorry episode. Cymbidium Chiisana got hung from the rafters in the shadehouse. It loved it. The growths matured and it sat there most of the winter. As with most of the C. canaliculatum hybrids the watering gets cut right back in winter, only enough to stop them from looking like prunes.

A couple of months ago I wondered if C. Chiisana was going to bloom, as most of the other C. pumilum type hybrids were showing spikes or were already in flower. As I lifted down the basket two big fat spikes as long as my thumb were poking up from the side of the plant facing the sun. Six weeks later out the flowers came.

While the plant was still in bud I went one more time to see if there was a picture of what the flower might look like. Santa Barbra Orchid Estate (SBOE) had a pic of C. Chiisana 'Kristen'! Funnily enough this pic was only put up in mid-May of this year. My heart got a bit of a flutter. Although not spectacular C. Chiisana 'Kristen' is exactly as you would expect from a hybrid between C. Mimi and C. canaliculatum 'Sparksii'. The buds were dark so hopefully mine would be just as beautiful. My heart sunk a bit when the flowers opened. It was in fact a little browny thing just like the smashed flower I had seen at the Ararat Cymbidium Show. How disappointing. Initial observations, however, can be very misleading!!! When the flowers opened the true beauty of the plant was revealed. The C. canaliculatum used was not 'Sparksii' but a normal spotted form. The results were radically different from the SBOE C. Chiisana 'Kristen'.

Cymbidium Chiisana 'Geisha Girl', as you can see is a little ripper. The lip is so pretty, being pure sparkling white with very dark red spots and edged in maroon-red. The very edge of the lip is a pinkish red which makes the overall lip look sharper than it actually is. Just behind the tip of the callus there is a pinkish blush, clearly seen in the second picture. It contrasts very nicely with the yellow overlaid with red of the petals and sepals. It is actually hard to describe in words the complexity of the colouring of this flower. The overall impression of the flower is brownish from a distance with a clear, sharply contrasting lip. When you get up close you can really see the subtleties. I hope you like it as much as I do. 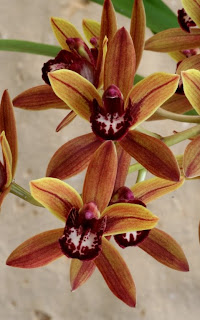 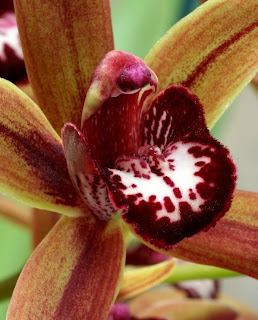 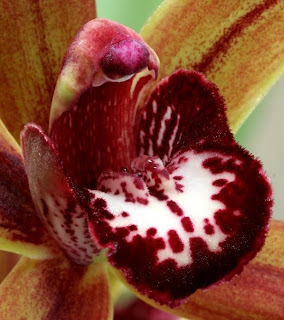 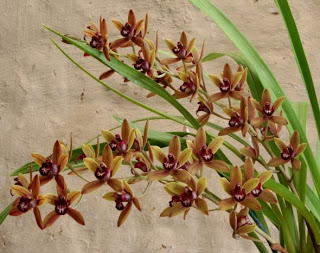 Such a sweet, sad, quirky but ultimately uplifting story. You spin the most amazing tales!! I am glad to hear some of your prized plants were returned to you. Thank-you!