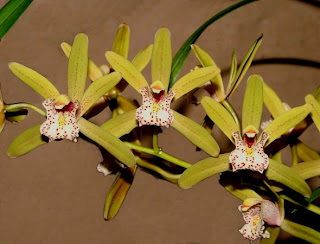 Friends on the web have been talking about this pretty little primary Cymbidium hybrid that goes under the name God Only Knows. Maybe one of them can inform me how it got this highly unusual name. It is an interesting hybrid because it is made between two quite distantly related plants within the genus. The one parent is Cymbidium floribundum (formerly known as C. pumilum) which is a small plant, rarely over 20 cm tall with flowers about 2 cm or slightly more across. The other parent is Cymbidium hookerianum (formerly known as C. grandiflorum) which, by contrast, is a large plant, upwards of 1 m tall with flowers 10 cm or more across. It is not unusual for crosses of such disparate species to not produce offspring and when they do, the young 'uns can be sterile or close to it.

Something went terribly right with this cross which is proving to be a very good parent in its own right. First of all, The taxonomists may have it all wrong, the plants may be more closely related than originally thought. The other thing is that breeders have figured out that if you double the chromosome count of the parents or the offspring, fertility can be restored.

When breeding plants so disparate in size, it is normal practice to use the larger plant/flower as the male (pollen parent) and the smaller as the female (pod parent). It is more probable that the pollen tubes from the larger will reach the ovaries of the smaller. Pollen tubes in most cases have a limited ability to increase in length. If pollen from the smaller flower was used on the larger flower it is highly likely that the pollen tubes will not elongate sufficiently to reach the ovaries. Just to contradict myself sometimes mating smaller flowers on to larger flowers does work!

Most of the Cymbidium God Only Knows appear to have been made with C. floribundum (pumilum) as the pod parent. This is evidenced by the general appearance of the offspring that more closely resemble the size and appearance of C. floribundum. Several years ago a friend of mine did the cross in the reverse order, using C. hookerianum (grandiflorum) as the pollen parent. Interestingly, while you can still clearly see C. floribundum in the offspring, the C. hookerianum parent is more strongly expressed. Just to confuse things even more, he used a green form of C. floribundum so as not to get a brownish flower. Compare this form of God Only Knows with my form. You will need to go to message 7 and open the jpg's.

Now the comparison between my plant and the breeders plant is not all that fair. My form has the normal ploidy level or 2N. The form pictured on the Cymbidium Forum has double the number of chromosomes or 4N. Most would find the breeders plant more attractive. Well, maybe not me as I tend to like the more spidery flowers. There has been no reports about the fragrance of the one pictured on the forum but mine has a beautiful fragrance. As you can see from the picture above, mine has spots instead of solid patches of colour and is much greener. Pretty isn't it?

The best part of this cross, in any of its forms, is that it is particularly cold tolerant, it will happily grow and flower profusely in a 15 cm pot and the flowers will last a good month in the middle of winter! It overcomes some of the shortcoming of both parents and emphasizes the strengths. Cymbidium floribundum flowers are short-lived and so-so in colour in most of its forms. It is however a superb grower, forms a specimen plant in no time at all and will flower regularly even after repotting or division the previous season. Cymbidium hookerianum on the other hand has the most stupendous large green fragrant flowers that last for months. Unfortunately, it is a large plant, hard to flower and tends to drop its flower buds if conditions are not just right.

Cymbidium God Only Knows is a very reliable and tough little hybrid that should be more popular. It forms specimen plants easily, flowers profusely and is fragrant and attractive. Even the leaves are a pleasant sight on a well grown plant. In the words of E.A. Bowles this plant 'Pays its rent'. Well, he was actually refering to Cyclamen hederifolium but it could equally apply to this plant.

There is a little post script to add to this blog. My friend Cliff from Gympie informed me of the source of the name God Only Knows! He said in a post 'This plant got it's name when Andy was given a flask of it in New Zealand by a hobbist grower who made the cross with the comment "God Only Knows what will come out of it!"'. Seems pretty appropriate considering the parents!

Apparently there is a post script to the post script! The original cross was made by Grant Bayley and a flask of it was traded with Andy Easton for some Cymbidium plants. The plant was later registered by Norbert Gomes mistaking Geyserland as the originator of the cross. Apparently, Norbert Gomes named the plant after the Beach Boys song "God Only Knows" and not because he was unsure of the parentage. It is amazing how fast the story can be corrected when you put things on the net, and sometime by the people actually involved. Thanks Andy!

Who would have ever conceived crossing two unbelievably disparate orchid species would result in such a beautiful orchid!

Thank-you again for a wonderfully told story with a quirky ending!