Last September I wrote a blog on Cymbidium Kusuda Shining and Friends. In one of the two blogs on the subject the hybrid between C. Kusuda Shining and C. virescens was discussed and various forms illustrated. This was before my photography lessons. At that point it was pretty much point and click and hope for the best. My photography teacher has brainwashed me into thinking that pointing and clicking is not good enough. Well, in all honesty I would have to agree with her.

Just to recap on the story of KS and friends. Andy Easton made the wonderful hybrid Kusuda Shining many years ago. This hybrid has proved to be a great parent to a wide range of colourful and interesting hybrids. Since the writing of that blog the hybrid between KS and virescens has been named by Andy. The formal name is now Cymbidium Flying Comet. A very appropriate name really. Some of the cultivar names we have tentatively put on our seedlings before it was named were 'Stella', 'Cosmo' and 'Super Nova'. We must have all seen the same thing in the offspring. Pictures of the parents of C. Flying Comet appear below. The picture of C. goeringii (virescens) is several years old and was taken with a happy-snap camera. 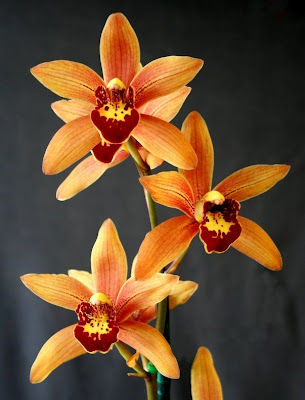 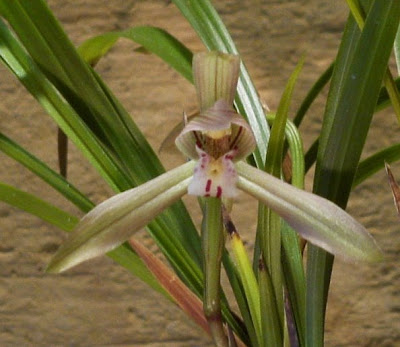 One of the runts of the litter my orchid grower friend named 'Randall's Gem' as a bit of a joke. He saw this plant as the ugly little brother to the more grand and colourful siblings. I liked it. Actually, my initial impression was not all that great but I took a picture of it anyway. It was not until the photo was downloaded to my computer and projected onto the monitor that the potential of 'Randall's Gem' became evident to me. I called my friend back and ask if I could buy the plant. He was going to sell it off as an no-name pot plant at a local mall! Thankfully, it was saved from a fate worse than death.

I came home and took several pictures of it. None of them all that great.

Since taking that original shot, C. Flying Comet 'Randall's Gem' has come into flower for the second time. This is good as I get a chance to redeem myself and take a better picture. Interestingly, the second flowering of the plant is much better than the first. I like to tease my professional grower friend that the reason the second flowering is so much better is that I am a much better grower than he is. We both know this is not true so we can laugh about it.

What has changed over the past year is that the plant has matured a bit and has been growing in much cooler conditions. I grow it in a shadehouse completely exposed to the elements, except sun of course. I do not push my plants as much with fertilizer either. They tend not to flower themselves to death like my friends plants and tend to be a bit more graceful.

Below in the first picture is C. Flying Comet 'Randall's Gem' on it's first flowering in 2008. The mug shot style is fairly typical of my photographs. One day my photography teacher will knock the police photographer out of me. The second and third photos were taken this morning at about 8:00 am as the sun was shining through the trees. Photograph four was taken at 8:30 pm tonight after the intensity of the sun had dimmed a bit. All four photos are the same plant just taken in different styles, with different camera settings and lighting arrangements. Photograph four is nearly spot on for colour of the flower. It is actually hard to get the colour correct. Green overlaid with pink on the petals and sepals and white with magenta red and yellow on the lip is a real challenge. Too dark and the green bleeds into the pink and makes it browny-red. Too light and the yellow and white of the lip flares and the magenta red turns faded red. Hopefully, I hit some sort of happy medium.

To see larger versions of any of the pictures just click on the photo. It will magically appear twice as big before your very eyes! Hope you enjoy them. 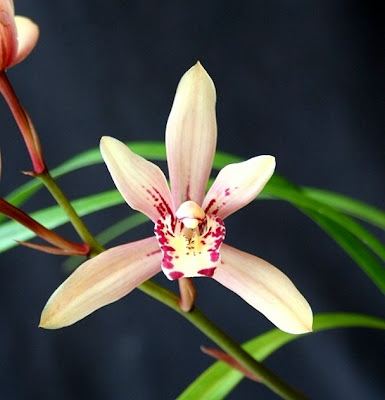 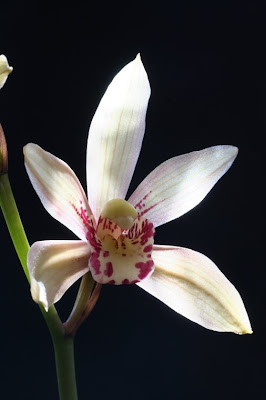 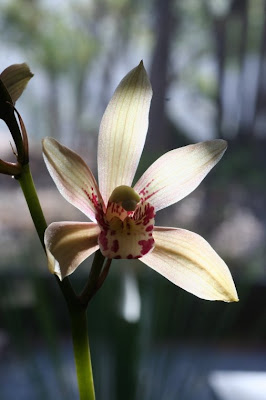 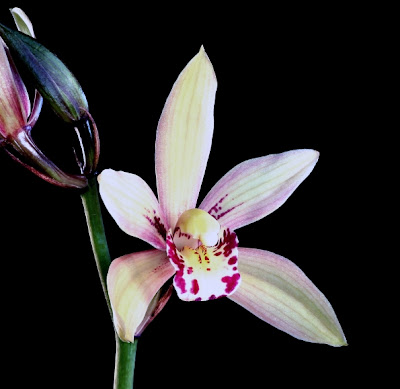 Your photography is indeed beautiful, and never ceases to amaze me with each blog you post. C. Flying Comet 'Randall's Gem' is utterly exquisite. Your backlit photographs really show it off! Love your work!