One of my modest goals in life is to collect together all of the species and primary hybrids of the genus Cymbidium. Before you go all crazy on me, there are only about 50 species of Cymbidium. That means if I grow one plant of each and all of the possible combinations of the species I would still only have a collection of 2,500 plants! Easy really. Well, not so easy actually.

The first thing is to get hold of all the species. There are a handfull of species that are readily available locally, mainly the big showy plants like Cymbidium tracyanum, C. hookerianum, C. insigne, C. floribundum, and C. lowianum. Without too much trouble you can even get hold of C. iridioides, C. erythraeum, C. elegans, C. eburneum, C. mastersii C. lancifolium, dayanum and C. cochleare. Cymbidium sanderae is relatively easily obtained though some do not consider it a true species. The same is the case for C. suavissimum. Several years ago a few plants of the very rare C. whitea came onto the market and sold for nearly $200. Now, seedlings of this species are appearing everywhere for $8. Damn, I should have waited.

The more tropical species are also fairly easy to obtain. Cymbidium findleysonianum, bicolor, aloifolium and atropurpureum are widely available in Melbourne but there seems to be little interest in them as they need a greenhouse in winter, most are larger plants and they have relatively small flowers when compared to the other species. They tend to not flower all that well in the southern latitudes and the leaves tend to spot with fungus in the cool damp period in winter.

The dwarf, broad-leaved species C. devonianum is readily available but flowering sized plants fetch prices that would make your toes curl. The even smaller growing C. tigrinum is an even more expensive little bugger. This weekend at an orchid show there were 100mm (4 inch) pots going for $45.00. It is particularly rare in cultivation here in Melbourne.

The three native species, C. canaliculatum, C. madidum and C. suave are 'common as muck'. The only problem is that many of them are wild-collected plants. I recently bought a 12 growth plant of C. suave salvaged from a logging operation. It set me back all of $20. Most of these wild-collected plants are not really value for money. They do not take well to being ripped off a tree and being stuck in a pot. Most die fairly rapidly. Those that live are of dubious quality. They are average for the species but that is not what horticulture is all about. Horticulture abhores average. Horticulturalists select plants with the best qualities, be it growth habit, flower size or flower colour. The best forms are crossed and the resultant seedlings grown on. It is these seedlings that go on to do bigger and better things. Oh, they also command the highest price. A three bulb plant of a tetraploid form of the dark burgundy form of C. canaliculatum was being sold for $100 several years ago. The money couldn't get out of my pocket fast enough. It was worth every penny.

Most of the other species are either not available or not available commercially. Cymbidiun ensifolium, goeringii, and sinense occasionally sneak out for a visit on the sale benches. They must be very special plants as the prices paid for them are enormous. We have yet to see several of the species appear in our collections. We only dream about C. wenshanense, C. roseum, C. elongatum and C. aliciae.

The primary hybrids are not everyone's cup of tea. In many cases they are not an improvement of the parents. Actually, there are a few that are decidedly inferior to the parents. You wonder what the breeder was doing when they dreamt up some of these crosses. They almost certainly looked better in the breeders visions than in reality. The interesting thing is that for some people, myself included, it is not so much about producing beautiful plants. The goal in the making of primary hybrids is seeing which traits are dominant and which are recessive. A secondary goal is to see if the cross actually works. The more closely related species cross easily and produce fertile offspring. More distantly related species may not cross at all or produce sterile offspring. This last scenario does not always mean that the cross is a dead end. Don Wimber proved this by converting the sterile C. Peter Pan from 2N to 4N. Admittedly, C. Peter Pan is not a primary hybrid but it does have a species, C. ensifolium, as one parent. After the conversion from 2N to 4N, C. Peter Pan became fertile again and has been used in a long series of stunningly beautiful and fragrant hybrids. 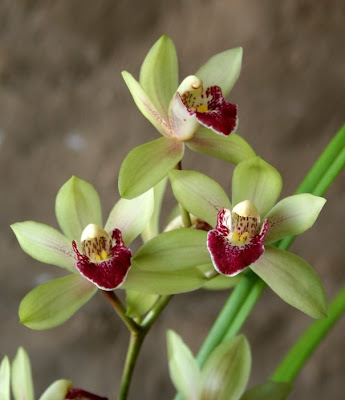 Two of the most delicate and in many respects interesting Cymbidium species are C. ensifolium and C. dayanum. Cymbium ensifolium is a very widespread species in the wild and has a large number of named forms ranging from pure white albinos through greens, tans, browns and reds. The base colours are some form of white, green or tan with various degrees of spotting of the darker colours. Cymbidium dayanum is a stunning crystaline white with bright red lines on the sepals and petals and a red lip with a bright yellow patch in the middle, at least in the typical form. Thre are fine forms that are pure white albinos and others that are red with burgundy striping.

A recent remake of the hybrid C Koh-hou used an albino form of C. ensifolium and the standard form of C. dayanum. The result combines the best and worst features of both plants. On the good side it is a very easy plant to grow and flowers prolifically. My larger plant is blooming for the second time this year and I fully expect it to flower at least one more time. The leaves are narrow and an extremely shiny dark green. The flowers are very near to C. dayanum in colour but 1/3 again larger. The flower spikes are upright to slightly arching like the C. ensifolium parent. The fragrance of the flowers is absolutely intoxicating. One small five inch pot with a seven-flowered spike perfumed the whole livingroom, dining room and kitchen. On the downside, the flowers are as short-lived as each of the parents, barely 3 weeks. If C. Koh-hou was a Crocus, Iris or a Rhododendron, 3 weeks would be a really long display. We have high expectations of Cymbidiums.


Sometimes a plant has beautiful flowers and an ugly plant. Likewise there are many Cymbidiums with lovely foliage and shockingly ugly flowers. Little C. Koh-hou is an absolutely ideal display plant; stunning to look at and a pleasure to the nose. It is one of the easiest of plants to grow. A specimen plant can be grown in a 6 inch pot. What it lacks in keeping qualities it more than makes up for in grace and elegance. 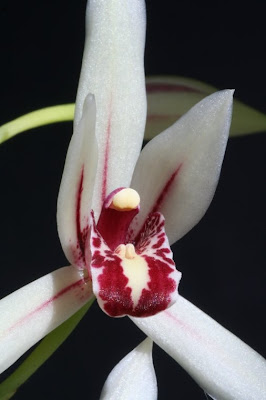 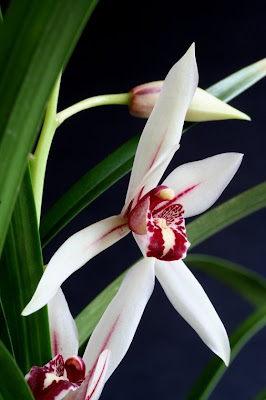 Cymbidium Koh-hou
Posted by Chuckie at 2:10 AM