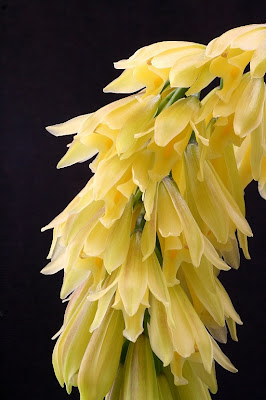 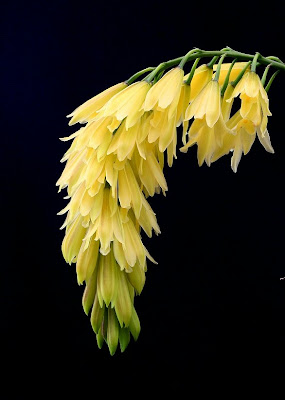 Midwinter is a time of conflicted emotions in a Cymbidium collection. The sudden and exciting onslaught of the autumn flowering plants, with their bright colours and fragrances, contrasts with the equally bright and floriferous burst of the spring flowers, now sitting as buds. The mid-winter lull can be quite distressing for some growers. This year has been particularly hard for many. The Autumn rush was particularly abundant. Unfortunately, the winter and spring flowering plants are running very late this year. The midwinter show of one of the local orchid societies a couple of weeks ago had only a handful of Cymbidium in bloom. Normally, there would be dozens of plants in flower for what is typically the start of the 'traditional' Cymbidium season. Nature really is wonderful at keeping us guessing!
One of the delights of the darkest, coldest months of the year is the lovely, Cymbidium elegans. The beautiful light to dark yellow or even peach-coloured flowers, positively glow in the subdued light of winter. The flowers could not be further from what most people view as a typical Cymbidium. The petals and sepals of this plant part just far enough to expose the lip and column, forming pendulous trumpets more reminiscent of a delicate, nodding lily or a yellow-coloured 'English Bluebell'. The base of the flower spike is upright to arching, the section containing the flowers being pendulous. Each flower spike produces up to 40 or so flowers. It is probably the only Cymbidium that is more noteworthy for the overall flower spike than it is for it's individual flowers. This is definitely a case of the whole equaling more than the sum of it's parts.
For a plant that is so beautiful, Cymbidium elegans, has been rarely used in hybridizing. All in all, it has been utilised 20 times in the past 110 years; 11 times as a pod parent, 9 times as a pollen parent. None of these plants seem to have gained any popularity despite their unique beauty. There are several new crosses on their way but it will be several years before we see the first flowers on these plants. This lack of popularity may be about to change!
One of the very early hybrids involving C. elegans is C. Forster Alcock (tracyanum x elegans)raised by J. Forster Alcock in 1909. This is one of those hybrids that would not have taken much thought. Both species flower at the same time and both are beautiful plants in their own right. The hybrid is pretty much what you would expect; a large leafy plant with large upright then arching flower spikes with high flower count. Interestingly, the flowers more closely resemble the elegans parent in colour and overall spike habit and tracyanum in openess of flower and robustness of plant. It has retained the fragrance of the tracyanum parent albeit not as strong. All in all, it is a very pleasant and highly decorative plant. 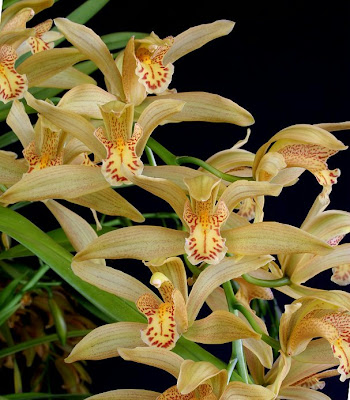 Cymbidium Forster Alcock
A more interesting and totally delightful hybrid is C. Ides of March (floribundum x elegans) raised by R. Vandyke of Valley Orchids in 1977. The cultivar 'Springtime' has been passed around specialist collections for years but has been, for the most part, dismissed. This is very surprising as it possesses everything you would want in a true miniature. The plant size is small, about 30cm, the spikes have numerous flowers, up to about 30-40 on a well grown plant and it is easy to grow. Even though it has been around for 30-some years it has never been used as a parent in any hybrid. This may be due to the fact that it has never been popular or even known to most growers. Hopefully, this little blog will prove to be the 'coming out' ceremony for this beautiful little debutante. I think it is a totally delightful little plant that deserves to be seen in all its glory! 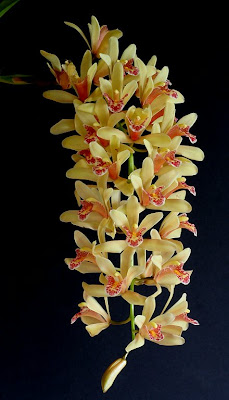 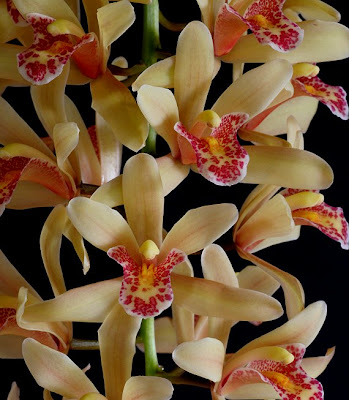 One of the more spectacular of the C. elegans crosses in flower at the moment is C. April Showers (Rincon x elegans). This lovely cross was produced in 1985 by that breeder of all things wonderful, Keith Andrew. It has to be one of the most inspired crosses. Who would think to cross a pink-flowered standard Cymbidium with and yellow-flowered arching-pendulous species with relatively small flowers with unconventional shape? Well, the result speaks for itself. I have two clones of this lovely hybrid; 'Elmwood' and 'Apricot Nectar'. 'Elmwood' has smaller, more open flowers on a modest-sized plant. 'Apricot Nectar' has much larger flowers with broader segments and more interesting colour. You pick, they are both very beautiful to me. 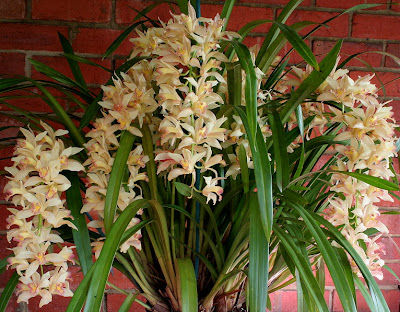 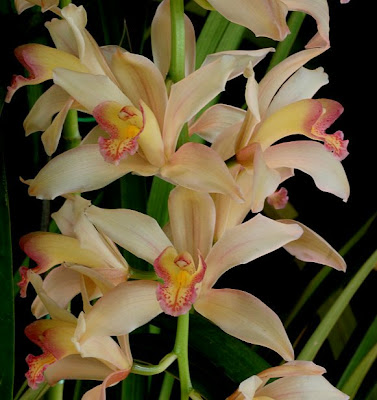 Cymbidium April Showers 'Elmwood'
Notice the dark pink edge to the midlobe and sidelobes of the lip. 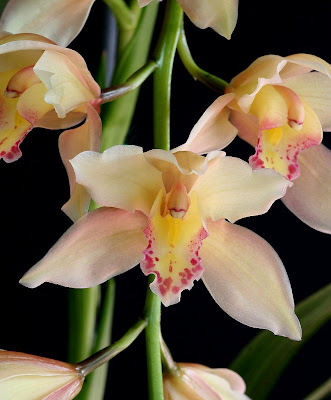 Cymbidium April Showers 'Apricot Nectar'
Notice the much wider petals and sepals and blush pink overlay on the sepals.


Another C. elegans hybrid just coming out at the moment is C. Cariad (elegans x devonianum) raised by Keith Andrew in 1976. Cymbidium Cariad 'Plush' is probably the most popular first generation C. elegans hybrid. This fully pendulous little plant has beautiful starry, yellow flowers with a remarkable labellum marked by two large purplish patches on either side. In Melbourne, this plant is appearing in many collections, taking pride of place amongst it's larger and more conventional 'Pendulous' Cymbidiums.
Overall, C. elegans, strongly influences spike habit and to a reasonable degree flower colour. The drooping, trumpet shaped flower is not a strong characters and seem to be easily compensated for even in first generation hybrids. The arching flower spike is particularly attractive. The general floriferous nature of C. elegans hybrids, two spikes per bulb, make this elegant species a real or at least potential contender for breeding highly productive pot plants. Give these interesting hybrids a try. They are modest in size, floriferous and provide just that bit of contrast to the normal collection of Standard, Intermediate and Miniature hybrids.
Posted by Chuckie at 6:10 AM

Hi Chuckie, interesting post on elegans. Incidentally I was doing a search on Stephen Early's site yesterday to see if there were any heat tolerant primaries made with C. elegans and noted two: Elsimon and Jumbo Grand. Jumbo Grand as I noted later, on the RHS site was made with Grammatophyllum elegans and not C. elegans. That left me with Elsimon, pictures of which I could not find anywhere on the net. Naturally, your blog stoked my interest when I saw you had written something on elegans.

Thanks Chuckie once again for a highly illuminating, fascinating and wonderful insight into the world of Cymbidium elegans. Your photographs are just sublime, and your posts are long awaited! Cheers, Archi!