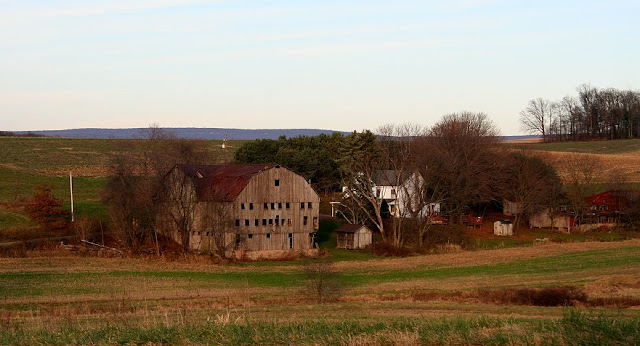 Levan Homestead - 2009
Like all families, my family contains a fair few mysteries. Fortunately, not all aspects of the history of my family are concealed. The history of the Levan family is actually very well documented! My Great Great Grandmother, Rosetta Levan was the last in my mother's line to hold that name. Rosetta became a Derr when she married Daniel in the 1880's. She gave birth to Clinton who went on to marry Fannie Linn. Then, Clinton and Fannie went on to give birth to Florence Viola Derr who married Charles William Mausteller! Oh, Lois was the result of the pairing of Florence and Charles. Lois is my mother!
In the 1927, the Reverend Warren Patton Coon compiled a book entitled The Genealogical Record of The Levan Family. It is an amazing book that basically does the whole  'who begat who' thing from 1685 through until 1927! There are lots of good stories included and of course an extensive history of the Huguenots. You see, the Levans or Le Van family were German speaking French folk, who became refugees when they were kicked out of France by the Catholics after the revocation of Edict of Nantes in 1685. They moved/escaped temporarily to Amsterdam, as you do, and then the adult children all hopped on a boat and went to the USA in 1715. By choice, they went to Pennsylvania because they had become aware that they could practice their religion there without persecution.
The Levans were not the only family of Huguenots to head off to Pennsylvania at the same time. The ship was full of them! It is generally assumed that there were about 16 families that sailed together and settled in the Oley Valley. The Oley Valley is a fertile broad expanse of relatively flat land just east of Reading, Pennsylvania. This area is 'famous' for the 'Pennsylvania Dutch', the Amish and the Mennonites. You know these religious groups, they shun modernity, have fairly strict practices and dress in the clothes styles that were popular in 1715. Maybe we won't talk about religion here. Let's just say that there was a fair amount of religiosity and barn-building happening in Pennsylvania in 1715.
As the Oley Valley filled up with farms, and churches, the families slowly started to move to the 'hills' north of Reading. Part of the Levan family headed out over the mountains and found an almost replica 'Oley Valley' in a broad valley about 60 miles northwest of Reading in a place that got named Numidia. They just couldn't get away from the religious references! The Numidia branch of the Levan family did very well for themselves as farmers and of course founders of many of the churches in the area. The deep fertile soils and short but very productive growing season, allowed bountiful harvests of a wide range of crops. Winter was a bit of a problem as snow and ice lasted a good 5 months in most years. Barn building was developed to a very fine art during the 1700 and 1800's. The landscape throughout central Pennsylvania is characterised by a range of styles of barns. What prompted this little story is the barn shown in the picture above! Yes, it could be any barn in Pennsylvania but it is not, it is a special barn. This was the barn built for the original Levan Homestead in Numidia. Look at the size of it! A four-storey barn with nearly the whole of the top half being the hayloft! Another remarkable point about this barn is that it is still owned by a Levan! As you come down off Mystic Mountain onto the gentle rolling hills of Numidia this is the first homestead to greet you. On the left of the road opposite the driveway, is the Levan farm stall. Here from late spring through fall you can purchase top quality produce grown in the fields you stand in and survey with your eyes.
In 2009, on one of my regular trips to my ancestral home in Rupert, my cousin, partner and I stopped to see the 'cousins'. We had a great chat, the traditional glass of ice tea and purchased a basket full of goodies. This trip could not have been timed better! The very next night was the Levan Family reunion. I could meet all the relatives! The story of that adventure will have to wait until another time. We were headed to the Mausteller reunion that day! We spent some time wandering around and getting a few pictures. Pictures, I might add, that have been printed and framed and now grace several 'Levan' family households! One of these photos is also the header of this blog.
Posted by Chuckie at 5:04 AM

I remember vividly the very day we stopped by the LeVan family orchard, snapped up some of their fine produce, and savoured the bucolic view of their magnificent barn. I feel quite privileged to have shared that moment! Thanks so much for reviving the memory of that wonderful day!