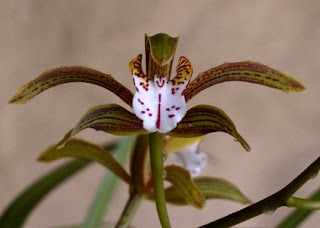 A recent post on an international orchid forum dealt with the identification of Cymbidium erythraeum, in particular the form that goes under the name of C. erythraeum 'Paradise'. The poster questioned a plant he had in flower that was a supposed selfing of the 'Paradise' clone. As I had raised several seedling of this same selfing I agreed to put up a sample picture of one of the progeny. So here it is (left).

The likely explanation for this divergence is 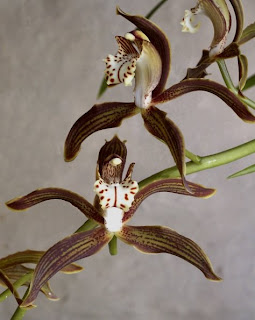 the very wide range of the species in it's native habitat. According to Du Puy and Cribb (2007) "it extends from northern India from Kumaon, through Nepal, Sikkim and Bhutan to Myanmar and the western provinces of Shina (Sichuan, Xichang, Yunnan)". Their illustrations clearly show the differences of the plants found at the extremes of its range, Nepal and Yunnan. 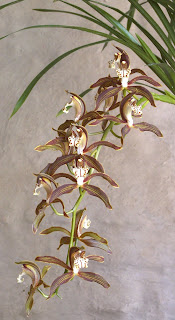 A friend of mine does 'artistic' pictures of my plants. You can find a couple of additional pictures of the original C. erythraeum 'Paradise' here. You can clearly see the arching stems and widely-spaced flowers. While C. erythraeum is not the largest or most spectacularly coloured of the Cymbidiums it does have a charm all of its own and a fragrance that is beautiful. One other point in it's favour is that the flowers last for months if the plant is kept cool and out of direct sunlight.

Another interesting site that has pictures of C. erythraeum and a range of other species is Stephen Early's webpage. You can find it here. Check out the individual species but also the "New and Doubtful" section where he deals specifically with the problem listed above. If you are willing to spend a heap of money on a book that is published mainly in Chinese check out The Genus Cymbidium in China by Liu Zhong-jian, Chen Sing-chi, Ru Zheng-zhong and Chen Li-jun in 2006 by www.sciencep.com. They have a few pictures of C. erythraeum as well. Some are mislabeled as C. flavum, which is in fact just an albino form of C. erythraeum.

Welcome to the Blogosphere, Chuckie!

Woohoo, I am so excited! Lots of time on here is in my future. It was a great experience to do the first one. So are you going to link it to yours? Is the grammar correct? Is it a good story?

Thanks Chuckie for a wonderful blog, and a fascinating insight into the beautiful world of Cymbidiums. You are an amazing storyteller, and the photos are sublime!