When I first came to Australia over 25 years ago I had the good fortune to meet and work with one the Australia's most renown orchid taxonomists and indeed one of Australia's best overall botanists, Geoff Carr. Geoff acted as my tour guide during field work carried out as part of a year of studying orchids in the wild throughout the world. This extended field work was just one part of the three year long Eric Young Orchid Scholarship based at the Royal Horticultural Society and Kew Gardens in England. During my initial stay here in Australia, Geoff and I traveled extensively in Victoria, New South Wales and Queensland. On these travels we observed hundreds of species, photographing them and recording critical details of their morphological characteristics, habitat and distribution. The travels with Geoff had to be one of the most intensive experiences a young botanist could have had. This trip was so life changing that it inspired me to come back to Australia after the scholarship ended to work directly with Geoff for the next seven years.

The second day after arriving in Victoria, Geoff took me to visit a good friend of his, Cam Beardsell a extremely knowledgeable naturalist. Cam lives up in the hills northeast of Melbourne. Geoff said that we were going to check out a colony of Spider Orchids that where highly distinctive and represented an undescribed species. In 1981 the colony we were going to see was the only known colony in the world and contained hundreds of plants scattered over a couple of hundred hectares. Apparently, the plant used to grow in scattered areas in Victoria and New South Wales. It occurred from an isolated mountain range in the western parts of Victoria called The Grampians to the hills near Albury and Orange just north of the Victoria/New South Wales border. Interestingly, the final refuge of this small pink Spider Orchid was half a dozen blocks of private land on the outskirts of Victoria's capital city, Melbourne.

Geoff, Cam and I had a wonderful day looking at every plant we could find of this undescribed Spider Orchid. We spent the rest of the day wandering around most of the forested private land blocks of the area looking for other orchids which were abundant in this remnant forest/woodland. This one day trip was to be one of the most memorable highlights of my year-long trip.

Several years later, after my return to Australia, Geoff formally described the species we had observed several years earlier. He named it Caladenia rosella (Rosella Spider Orchid or Small Pink Spider Orchid). You can see from the photograph how beautiful this plant is. 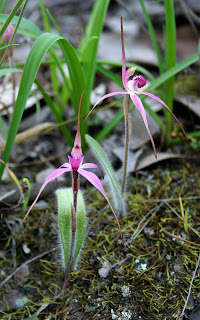 Unfortunately, in the time between my first visit and Geoff describing the species, its numbers in the wild had dwindled. The site had become invaded by the introduced grass Briza maxima (Quaking Grass) which competes for the meager nutrients and water available at the site. Another threat was the locally common bird species the White-winged Chough a bird that looks superficially like a crow or raven with bright red eyes. These larrikin, slightly maniacal birds live in colonies and behave much like chickens, picking and scratching through the leaf litter eating just about anything including orchid tubers. Most worrying however was the ever increasing number of houses and people moving into the area and their fireplaces and wood stoves that needed stoking.

Thankfully, this beautiful species had a very strong advocate in Cam Beardsell. From before the time I met Cam he was recording every detail about each individual plant in the remaining colonies. Over the past 25 years this man has nearly single-handedly been the caretaker of this precious orchid. He has protected nearly every plant to ensure that the Choughs and Rabbits don't eat them. The weeds that come up anywhere near the plants have been meticulously hand-weeded. Even the small wattles that the pollinators rely on for food have been replanted. The pollinator, a small solitary bee, has an interesting story itself. The female bees collect wattle pollen and store it as small balls in their nests in the ground. They lay their eggs on the pollen balls and the larvae use them as food.

Others people have come to the help of this orchid over the years. The Australasian Native Orchid Society, in association with the Royal Botanic Gardens Melbourne, have carried out in vitro propagation of the orchid with the view to reintroducing it to suitable habitat in the wild. The Trust for Nature (Victoria) has encouraged local land holders to put conservation covenants on their land to preserve the habitat. Clifton Pugh and his legacy the Dunmoochin Foundation have purchased several blocks of land that have colonies of the species. One of these blocks has been donated to the Trust for Nature. The local Dunmoochin Landcare Group has done a splendid job of rehabilitating the surrounding land, planting hundreds of plants to rehabilitate the forest and getting rid of large swathes of weeds.

Despite all of this involvement from a wide range of people the species had continued to decline. This was mainly attributed to the drought that we have had for the past decade. Caladenia rosella is now listed as Endangered under the Federal Environment Protection and Biodiversity Conservation Act and the State of Victoria's Flora and Fauna Guarantee Act. Both of these acts have strengthened the overall protection of the species and in association with the conservation covenants from the Trust for Nature brought much needed attention and money to help in saving this species from extinction.

Recently, a block of land that had not been built on was purchased and a house was proposed to be built on it. Needless to say the local council and the local residents did everything in their power to stop this development. Caladenia rosella was known to occur on the block of land and clearing for the house and attendant gardens, sheds and water tanks would have destroyed not only the plants but the possibility for them to come back. I might add here that the overall population of the species had gotten down to 140 or so plants in the wild. The block of land is pictured below. 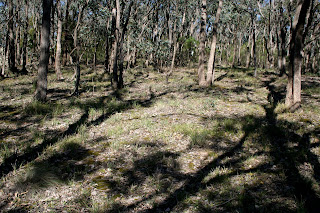 The developer, not happy with a refusal from the local council took the matter to VCAT (the Victorian Civil and Administrative Tribunal). Several of us in the local community went along and argued our case against the development but we failed. Even evoking the State and Federal legislation did not sway the decision of the tribunal. There was a slight ray of hope at the end of the hearing. The developer agreed to a range of conditions that had to be met before any building was to take place. There was also an additional push by the Federal Government in association with the State Government to put a halt to any development until it could be established exactly where on the block the plants occurred. This spring the orchid recovery team of the Department of Sustainability and Environment in association with members of the Dunmoochin Landcare Group located a thriving colony of Rosella Spider Orchid growing exactly where they had grown in the past. A couple of other plants found in the area are Arachnorchis parva (Small Green-comb Spider Orchid) and and the small shrub Leucopogon virgatus (Common Beard Heath). 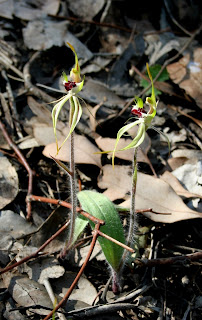 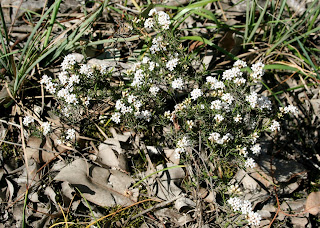 The conditions on the developer have proved too great for him to meet and he is in the process of selling the block of land. The local residents, the Dunmoochin Foundation and the Trust for Nature have all expressed interest in purchasing the land. There has even been a proposal to form a consortium of the above people and groups to make the purchase of the land more of a sure thing. The only problem is that even with all of the resources pooled there is still not enough money to buy the block and manage the plants. We would dearly love to be able to save this critical part of the population but we obviously need help.

Do you think you could help us? Any monies you could contribute would be greatly appreciated. Both the Trust for Nature and The Dunmoochin Foundation are charitable trusts. You can contact either one. Lynlee Tozer at the Trust for Nature will be able to speak with you. Just mention that you have read about Rosella Spider Orchid on this blog and how you would like to help. You can visit the Trust for Nature home page to get their contact details and learn of ways of financially helping.

Thank you
Posted by Chuckie at 3:54 AM

Dear Chuckie
I have had the greatest of good fortune to see this splendid, graceful and extremely rare spider orchid in flower, and it is a magnificent sight to behold. Thank-you once again for a beautiful tale. Everyone who stops by your page should take an interest in this rare and endangered and beautiful orchid.

It is indeed a delightful plant and everyone I know who has seen it has fallen in love with it. Will you be helping us out? The Trust for Nature is a very competent organization with a great mission statement and record of doing good work. They would love to hear from you.

Interesting story. I am wondering if you would like to turn it into a habiat loss/preservation page on the http://www.orchidconservationcoalition.org/hl/index.html It would give the cause more publicity and maybe money. The OCC is as non profit as you can get in that we take in no money, just try and match donor with worthy causes.

I would love to help out! Guess I better check out the Trust for Nature website! Thanks for the extra photos of the beautiful Arachnorhis parva and Leucopogon parviflorus, they are truly special!