Some plants are just steeped in mystery and romance. There is the legendary Rafflesia arnoldii that purportedly has the largest flower in the world. This giant flower, up to 1 m across and weighing in at 10 k grows in the deepest darkest rainforests of Malaysia, Sumatra and Indonesia. Rafflesia adds to its mystery as it is parasitic, living its life inside the stems of the grape relative Tetrastigma. The flowers burst through the sides of the plant stems in the same manner as the alien emerged from the humans in the movie Alien. As if this plant did not have enough weirdness about it the flowers just had to smell of rotting meat and be pollinated by blowflies.

The orchid world is resplendent with stories of fantastic plants that have been found once in some far-flung jungle and never to be seen again. Paphiopedilum sanderianum was found in 1885 in Borneo but the specific location was never recorded. This bizarre flower has twisted hairy petals that grow up to a metre in length. Imagine a flower stem with 6 flowers with long, flowing hairy tresses. The plant equivalent of Medusa! Some plant freaks go so far as to suggest that these long hairy petals are ladders, up which the insect pollinators climb. It was not until 1978 that it was rediscovered. The only proof that this plant existed was a beautiful drawing. Some botanists went so far as to think and, God-forbid, say that it may have been a hoax. The plant still grows in a highly protected national park in Borneo. Oh, you can also buy a 2.25 inch pot for $125.oo.

The genus Cymbidium is not immune from both real and imagined mysterious plants. Cymbidium sanderae , or Cymbidium parishii var sanderae as it is more widely known, is a classic. It is not really clear where the plant actually comes from. The location on the original label does not exist. The specimen sheet that represents the type specimen is a mixture of flowers from different plants, giving the impression of a hybrid swarm. Cymbidium sanderae was lost to cultivation and in the wild until it was discovered in a greenhouse in California. That original plant was propagated and colchicine treated to convert some of the progeny into tetraploids. The diploid and tetraploid forms are now grown widely throughout the world but have still not been relocated in the wild. The plant freaks starting to question the validity of C. sanderae as a species as they are wont to do with long 'extinct' plants.

Anyone that has had even a passing fancy for Cymbidium hybrids and their parents would know that C. Alexanderi 'Westonbirt' is by far the most famous stud plant, having sired or carried literally hundreds of progeny. Most of the large-flowered Cymbidium hybrids and an increasing number of the more modest-sized hybrids can trace back to C. Alexanderi 'Westonbirt'. I won't go into the history of this plant as this plant is probably the most written about Cymbidium. Suffice to say it has it all, beauty, fertility, fame, fortune, it was breed on the estate of a famous aristocrat and awarded a First Class Certificate by none other than the Royal Horticultural Society. No story is complete without a bit of skullduggery and a few questions about breeding!

But lets back up a bit here. The grex C. Alexanderi was made many times using slightly different parents. Siblings were also crossed with each other. All this breeding resulted in a wide range of colours from pure white albinos through yellows, pinks and murky reddish browns all using the same 'species' in the same proportions. Several of these alternative C. Alexanderi were also awarded. All went quiet on creating C. Alexanderi until recently when Andy Easton tried to repeat the cross using improved parents. His results are spectacular but nothing has resulted that approaches C. Alexanderi 'Westonbirt'.

A few of these plants went to a grower in Canada. From there, divisions were sent to Australia and found their way into the collection of a very wealthy and very private gentleman. His gardeners were very meticulous and kept this mans collection of awarded plants in very good condition. Near the end of this man's life, he passed on divisions of his prized plants on to another wealthy and, interestingly enough, very private man. Neither of these men had the slightest interested in the commercial orchid trade having made their fortunes through business for the former and by being a surgeon for the later. The surgeon, a good friend of mine, called me up last year and asked me to come over. Normally, it is me that rings him! This got my mind thinking he had gotten a new lot of plants that he wanted me to see. The truth was much more exciting.

When I arrived at my surgeon friends house we had the obligatory cup of tea, chocolate biscuits and chat. He then started to talk to me about his health. He is well past his seventieth birthday. He mentioned that his heart had been playing up and that the doctors had to 'zap' him a few times to get the beat regular again. This had encouraged him to think of his future, his much younger wife's future and what was going to happen to his plants. He was kind enough to say that he had written me into his will. I was to have first dibs on his collection of species. This was a very nice gesture and I must admit, slightly overwhelming to be told this before someone's death. I felt honoured that he would trust me to carry on his legacy. I had seen his plants many times and his collection of species contains almost all awarded clones. The greenhouse is meticulously clean and the plants are well grown and virus-free. Any new plants are quarantined and tested before they are allowed into the main greenhouses.

What happened next shook me. Did I mention this surgeon is a very private person? He keeps a lot of secrets and the one he was about to reveal was a stunner. He took me to a greenhouse way down the back of the property that I had never been to. Actually, I did not even know it was there. He unlocked and opened the door. What was inside was amazing. There were three long benches running the length of the greenhouse, the one in the middle double-wide. It contained only Cymbidiums, all grown to specimen size except for a small group of a few dozen smaller pots on one of the side benches. It was like going back in time. The plants were all grown in terracotta pots and meticulously groomed. The floor was covered in clean algae-free concrete creating an almost surgical cleanliness. As we walked down the edge of one of the benches, I asked him what these Cymbidiums were. FCC's he said. Yep, he had made a collection of only FCC Cymbidiums. and had been doing so since he was a young man.

One particular plant caught my eye, a plant I had only seen in pictures. Yes, it was C. Alexanderi 'Westonbirt' . I asked him where he had gotten it. He told me the out of England to Canada to Tasmania story. He had inherited his older plants from the Tasmanian man in the 1960's. Then he mentioned that Dr. Don Wimber had seen the plants in the 1960's or 70's and had confirmed its identity. This shocked me as I didn't think he was social enough to have known many people in the orchid world. This helped me to believe him that this C. Alexanderi 'Westonbirt' was the real deal.

More recently, my friend has had another turn. Unsurprisingly his first priority was to ensure that his wife will be well looked after. More surprising is that he is almost equally concerned about his collection of awarded Cymbidiums. I visited him this weekend to catch up. Again he rang me not the other way around. No Tea and biscuits today. He was in the mood for a good chat. He even berated me for being fifteen minutes late. A quick pass through the species house and straight to the Cymbidium house. Door unlocks and in we go. This time bypassing the specimen plants and right to the smaller plants. There it is, C. Alexanderi 'Westonbirt' in full bloom in an 8" pot. He reaches down, picks it up and hands it to me. He repeated this with half a dozen other famous plants. I still have not come down from the excitement. I ask him if he was trying to give me a heart attack.

Now I have a dilemma. I have to build a greenhouse like his. I would like something with a concrete floor, brick base and aluminium and glass top. Oh, and a lockable door. My finances are nothing like my friend's. For the moment, my new plants are locked in my potting shed.

When I got home I had to quickly get a photo of C. Alexanderi 'Westonbirt'; partly to prove it was real and partly to capture it for posterity. I had never seen a real plant and I could touch and look at this one to my hearts content. Most, if not all of the pictures I had seen, looked nothing like the original painting done on the day it was awarded at Greycoat St. London, SW1.

The first photo below is reproduced courtesy of the Royal Horticultural Society, London (Orchid Committee) . It shows a painting of a single flower of C. Alexanderi 'Westonbirt' on the day it was awarded, 14th march 1922. The other three are photos of plant in my potting shed. Have a look at the upper flower in the photo with two flowers. Remarkably similar to the drawing from the RHS. Even the petals are folding in just the same way. I wonder how long it will take me to settle down? 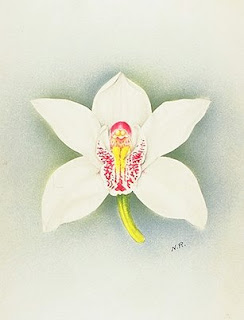 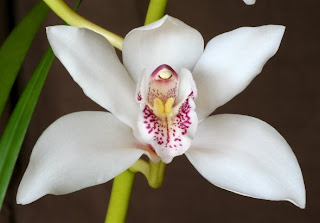 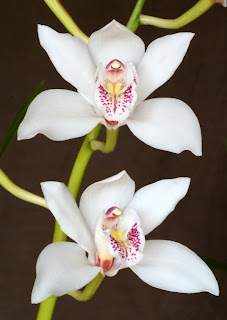 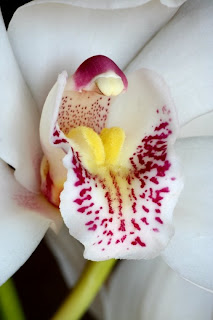 Wow...wow! The likeness of your Cymbidium devonianum to the RHS awarded specimen in incredible! Thank-you again for a story that weaves a good old yarn, some history and a dose of science: your tales are at once engaging and engrossing! Cheers!

Oops! My bad! I meant to refer to Cymbidium Alexanderi 'Westonbirt'...in your blog!