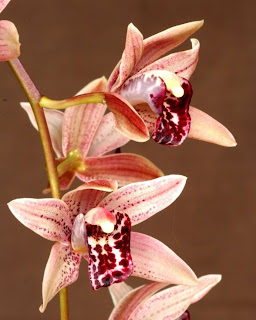 People grow plants for all sorts of reasons. When just a teenager I had the pleasure to work for a nursery woman named Florence Bertermann. She was an eccentric old cuss. In 1936 she graduated from Bryn Mawr college near Philadelphia where she had majored in horticulture. Shortly afterward she met a nice serviceman and planned to get married. A Bryn Mawr graduate getting married at that time was a highly unusual occurrence due to the politics of the day. Did I mention that Bryn Mawr College was a women's only college? Thankfully, or maybe not, Florence's fate intervened and she did not get married. The war took her servicemen. She was so 'broken-hearted' (her words) that she never again even dated a man. Interestingly, she kept of picture of her serviceman, I never did know his name, on the wall above her television.

Florence, being a woman of means, did however hire an African-American man-servant named Lee who took care of her until the day she died in 1976. There was an uncanny resemblance to the story portrayed in Driving Miss Daisy going on between these two. Florence and Lee set up a nursery business together near to Bryn Mawr in the then rural Newtown Square. She grew and hybridized a great many hardy shrubs and trees and maintained some beautiful glasshouses full of exotic plants. By the time I met Florence most of her outdoor nursery was overgrown and more like a jungle. She did still sell plants though. My job was to look after the greenhouses.

The greenhouses were just magnificent for a 12 year old boy. On either end and along the back of one of the 'tropical' greenhouses were exotic creepers that she harvested the flowers from to sell to florist shops. Most of the back wall was covered in the amazingly fragrant Stephanotis (Stephanotis floribunda), a beautiful pure white Hoya-like flower 4cm wide with a long floral tube, the flowers being produced in clusters of 20 more. Stephanotis is a classic, or at least was a classic, flower for wedding bouquets. At the far end of the greenhouse, climbing all the way to the gables, was an intermingled mass of Scarlet Passionflower (Passiflora racemosa) and Bleeding Heart Vine (Clerodenron thompsoniae).

The cooler greenhouses were less interesting, basically used to house plants that were just outside their range of hardiness and of course for the seasonal bulbs that would be hoisted out of the cold frames just in time to flower for Easter or Mothers Day. One bench of the greenhouse contained a large number of Cymbidiums, again used for cut flowers. It is interesting that even to this day I can remember the name of one that I particularly loved. This stunner of a Cymbidium was Lowell Swisher, a clear buff colour with red spots on the lip. Florence taught me the value of Cymbidiums with this plant. Even in 1970 she was getting $1.50 apiece for the flowers. Lowell Swisher commonly produced 15+ flowers per spike and her bigger plants had 6-8 spikes. That is $130 - $180 per year per plant and she had dozens of plants! This was big money in 1970. I was lucky enough to inherit the Cymbidiums and other orchids that Florence had and luckily by then I had my own greenhouse to put them in.

So what has this got to do with Cymbidium devonianum? Hanging in the corner of the cool greenhouse were several redwood slatted baskets filled with a Cymbidium much different to the others sitting firmly on the ground in their terracotta pots. These hanging cymbidiums had leaves about 4-5cm wide and about 30cm long shaped like long bent spatulas. The upper half of the leaf was broad and rounded on the end, flopping over slightly. This wide section tapered abruptly into a narrow petiole-like section that was bolt upright and held the broad section well above the basket giving and impression of a bunch of green banners on sticks. Even stranger, the flowers did not rise up above the foliage like their terrestrial relatives growing on the benches under them, but plunged through the osmunda fibre in which the plants were growing and out through the slats at the bottom of the basket. The flowers were not very pretty to a 12-year-old but held a strange somewhat creepy fascination. There were basically green, spotted with brown on the sepals and petals with two purplish-red spots on the sides of the lip. I am not sure if it was the flowers or the particular spot where these plants were growing but I distinctly remember the not overly pleasant smell. This smell could of course have been the deposits of one of the numerous cats that would spend their time in various spots in the greenhouse, especially this shady corner with a thick growth of Holly Fern (Crytomium falcatum).

Many years later I learned that this hanging Cymbidium was indeed C. devonianum a relatively rare, highly distinctive Cymbidium. Unlike many of it's relatives is primarily grows on rocks (lithophytic) and only occasionally on trees. It sends it's unusually thick roots through the thick covering of moss on the rocks and spreads its flowers spikes along the top of the moss. It grows in mountain areas in nepal, north-east india, through to Thailand, Vietnam and the very western parts of China (Yunnan).

Unfortunately, my plants are not in flower at the moment, it will be a month or so before they open. You can easily find pictures of Cymbidium devonianum on the net. It almost seems as if there is a competition on the web to get a picture of a plant with as many flower spikes as possible. It is a habit of this plant to flower it's little head off.

What got me started on the subject of this post is that my friend Sue is giving me lessons on how to photograph plants properly. You can see her pictures of my plants here. My pictures have a way to go before they have the finesse of hers but I am getting better at it. My task this weekend was to take pictures of the many Cymbidiums that are flowering at the moment. I like to keep a record of all my plants.

My collection, as I have mentioned before, is of the 'not the usual' type of Cymbidium. Although beauty does come into the equation when selecting plants for the collection, my interest is heavily focussed on species and primary hybrids. I actually find the species, primary hybrids and less complex hybrids much more interesting than the highly bread types that are much of a muchness. I am fascinated how character traits are passed on in primary hybrids. Below are a few of Cymbidium devonianum primary hybrids (hybrids between two wild species). All of the pictures below have been taken by myself this weekend except for the picture of Cym. Tiny Tiger that was provided by my friend Julian. If you click on the picture it should bring it up to a much larger size. Notice that the cell structure is clearly visible on some of the flowers. The speckling of C. devonianum flowers and pendulous flower spikes are pretty dominant as well. I hope you enjoy! 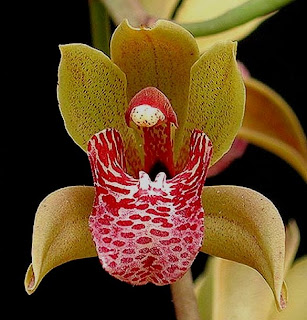 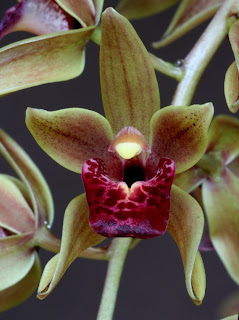 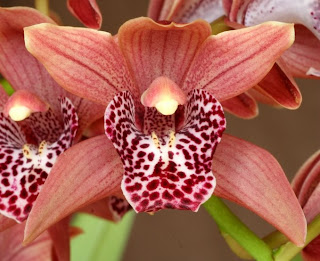 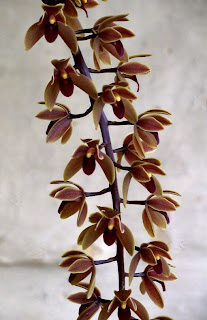 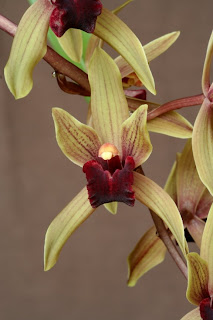 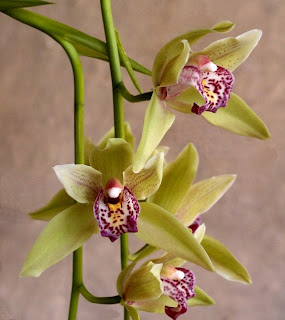 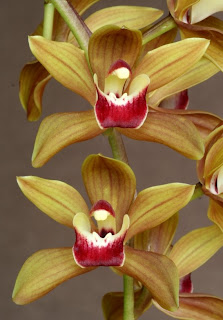 How very fortunate you were as a boy to be surrounded with such beautiful and special plants! Thank-you for the fantastic story of C devonianum...such a sublime orchid!

I`m a newcomer to orchid growing and have just received my first Devonianum plant. I`m looking forward to rearing it to flowering. Thanks for the lovely story of your road to cymbidiums.
By the way I`d be thankful for any tips on this plants culture. I live in the UK.

Reading this is so special to me! I lived around the corner from the nursery and I'm sure as a little girl I observed you at the nursery! It was wonderful to read about what beautiful flowers inside that we never saw. As a child we all looked at that house as a mystery. Instead, it must have been a wonderland! Thank you SO much! I loved reading this!!!

Would be great to hear from you. Could you email me directly? You will find my email on my blog. Glad you appreciated the blog. My memories of Florence are strong. She really did help set me on my present path!