Guess the Hybrid - for my forum friends

One of the internet forums that I dip into once in awhile, alright, in truth every day, has a periodic topic called 'Guess the Hybrid'. Usually, the plant is an un-named hybrid, sometimes a named hybrid of unusual form. These little guessing games are interesting as they challenge people to think. They also help us to refine our knowledge, especially of heritable characters.

A couple of side issues that have come up in the past couple of months have been the quality of Cymbidiums in Australia and the quality of the pictures of them. There are few orchid magazines in Australia compared to America. Inevitably, space is limited in these magazines and only a few pictures can appear. By a few I mean less than 50 in the two big orchid journals and less than 25 or even 10 in the smaller ones.

Many of the people in the various orchid societies are keen growers of orchids. The demographic is generally retired people. Their abilities with a camera? Well, it is understandable that some people would be critical of their photographs. For the most part the photos are mug shots or pictures of the whole plant. The mug shots look like the mug shots of famous people taken after a big night on the town. The flowers look a little past their best. Even the photographer was obviously having a bad night, lacking the ability to focus properly. Many of the pictures are compositionally challenged, a little off centre or with the flower position at funny angles. Almost inevitably a flash is used that does horrible things to the colours and makes the 'portraits' look harsh and washed out.

Many orchid societies around the world employ professional photographers to take pictures of the awarded plants. Smaller clubs and less well-off clubs have to get Ethel, Harry, Violet or Richard or any other person hanging around with a camera to quickly snap the picture. In the age of the digital camera, everyone things they are a photographer. Few if any of them are in any way professional, and even fewer have actually taken a class in photography. Some of these would be photographers have not even read the manual and don't know what half the buttons on the camera are for.

Complicating matters is that the people who do own special or very high quality Cymbidiums would not even think of exhibiting them in public. Several good reasons are given by various people for not displaying their best plants in public. First and foremost is that when plants are exhibited at a show, ever man and his brother wants to touch the plants, photograph them or worse yet steal them. Many do the former two, occasionally some do the later. Part of this 'touching' involves the removal of pollen to be used in breeding programs. The best plants are the best breeders, for the most part, and no breeder in their right mind would want to give away their precious pollen to be used in someones breeding program. I remember exhibiting a plant of Arachnorchis (Caladenia) rosella in the mid-1980's. Within seconds of putting the plant on display, all of the pollen was taken. Secondly, you never know who's plant may be virused. This non-lethal but severely disfiguring disease is not something any high quality grower would want in their collection.

One of the commentators on the forum remarked 'Why are Australian Cymbidiums so Ugly?'. I must admit, that at the time my mood was not the best and my reaction was uncharacteristically grumpy. Going back and reading the post now, it was remarkably terse, lackied humour and used the word 'unfair' more times than was absolutely neccesary. I still feel that the commentators comments were unjustified but looking at the magazine he was referring to he/she would get the impression that Cymbidiums in Australia were 'Ugly'.

Truth be told, there are good-looking Cymbidiums in Australia. Tastes may vary from those in the USA or even Europe, England or Japan but they are pretty none-the-less. Indeed, Australia has at times 'Punched above it's weight' in Cymbidium breeding. It seems as though we are going through a light patch at the moment. I used the term 'It seems' advisedly. There are many interesting and novel hybrids originating in Australia that are not shared with the public, especially with those in the USA, Holland, Japan and even Australia. The history of people taking the best of Australia's breeding and propogating thousands of plants through meristemming is reknown. These proliferators, as they are known in the trade, are a scourge, making handsome profits by picking the eyes out of legitimate breeding programs.

For the benefit of our forum members, I offer up the plant below. Hopefully, the picture is of sufficient quality to judge the quality of the flower. Unlike some of the 'guessing games' posted on the forum, there is no prize with this game. The 'winner' walks away with a warm inner glow of being the first to guess the plant by using their oversized brains filled with hundreds if not thousands of mental picture of plants they have seen. 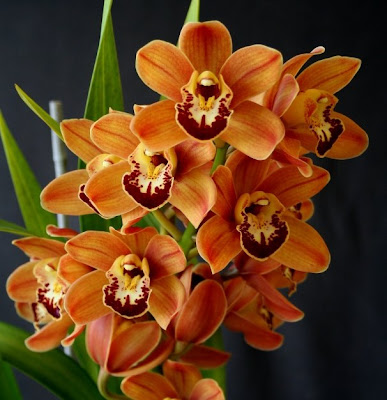 Cymbidium William Weaver
You will see that a name has now appeared on the photo of the mystery plant. This is a lovely plant bred by Andy Easton. The person who guessed the name correctly was Ha Bui my generous and kind pen friend who I will meet face-to-face one day! The incorrect guesses were very interesting and even had me doubting the labels on my plant! Thankfully, All was well, with Andy confirming and even congratulating the winner before I had a chance to.
Posted by Chuckie at 4:32 AM

Possibly the hybrid of God Only Knows X Hazel Fay but of course that is presuming that you have recently made the photo and that the plant is compact in its growth. Interestingly it is very like a good Tangerine Mary but that cross is old.

Not GOK or Tangerine Mary. It is a compact grower. It flowered last spring here in Australia, approximately 6 months ago. The picture has been waiting for an opportunity to appear on the blog. Third hint: one parent is a primary hybrid, one parent of which is Cym. devonianum.

What makes an orchid 'ugly'? Is it a personal thing or are there specific criteria by which flowers are judged?

Cym Nancy Miyamoto, mine blooming now in no ca

There are formalized rules related to the configuration of cymbidiums. These rules aside, human preferences play a major role in what is attractive and what is not attractive. The rules try to mimic and articulate these preferences but in the end taste is a very personal thing. Each of us knows what is pretty or ugly to us. For example, I think that large nearly round flowers with overlapping petals are unattractive. My preference is for more open flowers that resemble wild plants, what is commonly referred to in a rather disparaging way as 'the charm of the wild species'. IMHO, orchids should look like orchids not dinner plates.

Based on the additional information this is almost certainly a William Weaver. It is also likely the best of a good cross, bloomed to date.

As ANZAC Day approaches it is timely to reflect on the man for whom the hybrid was named. He was a young Texas-born soldier killed on the Dutch-Greman border in the final days of the Second World War. He was like so many young men who gave their life so that we can enjoy the freedoms that many pay so little attention to, today.

A friend of mine suggested to take a look at your site coz of great stuff you have here. I must say your blog is very interesting.

By the way you might be interested to join DIRECT ART AUSTRALIA'S monthly photo contest. Winners will have the chance to turn their photos into hand-painted portraits. You can check out their Facebook page at http://www.facebook.com/group.php?gid=70645093608