Wednesday the 9th of December started fine. It was a relatively warm (55 F) and sunny day in Philadelphia considering it was the middle of winter. My flight back to Australia was not meant to take off until 6:15 so had plenty of time to enjoy a few last hours with my family. Got to the airport early and whizzed through security and had a delightful Chicken Curry in one of the concourse restaurants. In retrospect, maybe it was not as delightful as first perceived considering the after-effects! Six o'clock and everything fine according to the screens announcing departures. Unfortunately, there was no plane at the gate! At 6:15 when we should have been departing an announcement came over the loudspeaker that our flight would be departing 40 minutes late. Not a worry, the connecting flight in Los Angeles was to depart two hours after we should have arrived. On the plane and then another 40 minutes sitting on the runway waiting our turn to take off. What caused this delay? Across 2/3rds of the continental USA there was a severe winter storm, we in Philadelphia were sitting in a little pocket of good weather. Pity the poor people of Chicago who were suffering -19 F and high winds or Buffalo, New York who were buried under 2 1/2 feet of lake effect snow. To cut a long story short, instead of the normal straight-line flight from Philadelphia to LA we detoured via Montana adding another 1 1/2 hours to our flight time. When the diversion to Montana was announced it became clear that my flight from LA to Australia was going to leave without me.
I don't normally praise an airline but United Airlines handled the situation very well. A dozen or so people stood in the service desk line awaiting re-assignment. I was number 6. The less than happy lady before me was the epitome of the customer from hell, lots of screaming and crying and flapping of arms. She left a very unhappy customer. By the time I got to the counter the attendant was frazzled and I was trying my best to act like the most polite customer. The reward for my great acting efforts was a lovely room at the LAX Marriot and a very nice breakfast the next morning! What to do until the next flight at 10:30PM on the 10th? By good luck I had the phone numbers of George Hatfield in my cell phone (mobile phone to the Australians). The very happy voice on the other end of the line and the words 'I'll come down and pick you up and we can play orchids today' changed what could have been a dreary day into one of excitement and camaraderie! Within an hour and a half we were eating the most amazing hamburgers from In-and-Out and heading up the coast highway to Oxnard.

George and I spent a wonderful day exploring every plant in his greenhouses, finding the gems and discussing a range of very interesting topics. There were many plants in flower and thanks to George's quick thinking and a staple gun we rigged up a mini-studio so that I could take some pictures. Most of those pictures will be used in future posts but there was one particular cross that particularly took my fancy. Now you would be right in thinking that this cross would be meaningful to me because it is in the process of being named after me (my real name not my nom de plume). Thankfully, I do really like the plant and can't think of another cross that is so befitting of my tastes in Cymbidium!

So what is this cross? Cymbidium Kusuda Shining x erythrostylum. This cross was made by George Hatfield of Hatfield Orchids and named in my honour, after I correctly guessed it's parentage from an unlabeled picture taken by another friend Ha Bui. Isn't it wonderful to have such thoughtful friends? It is especially poignant considering that at the time, I only knew the two of them from an online forum and emails. I am not even sure they knew what I looked like. On second thought they may have reconsidered after catching a glimpse of my mug.

Kusuda Shining is that fabulous early season hybrid, bred by Andy Easton, that is proving to be a wonderful parent and sparking a whole line of breeding. Many of the hybrids directly derived from it are in the yellow/orange/red range but as you will see other colours are certainly possible. Within the grex there are various selections exhibiting a range of colours from deep chestnut to bright yellow, most with heavily marked red labellums. There is reported to be an albino form out there somewhere but I have yet to see this. Maybe someone reading this can post a photo somewhere?

Cymbidium erythrostylum is the famous early season white species that has been used extensively for breeding high-quality whites, although generally not in the first couple of generations after direct use. Interestingly, C. erythrostylum is not restricted to breeding whites. It is well known for breeding pinks and even turns up in the heritage of reds and browns and even the occasional green. The fault with erythrostylum, according to Rebecca Tyson Northen, is the fact that the petals point forward and enclose the column, a syndrome she calls 'rabbit ears'. While this creates a look much different to what we expect in conventional Cymbidiums this configuration provides a unique look to the flowers that is both elegant and distinctive. This look is inherited in first generation hybrids, although modified to varying degrees. While this look is not appreciated on the show benches of cymbidium societies it is very popular with some sectors of the general public who look for novelty or are from specific cultural backgrounds.

Just as a reminder, Cymbidium Kusuda Shining and C. erythrostylum are pictured below so that you can see what the parents are. 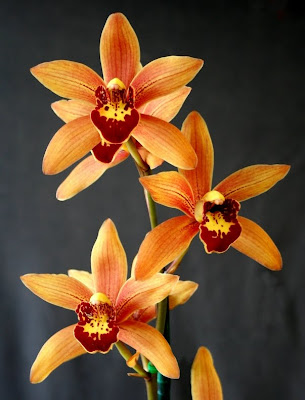 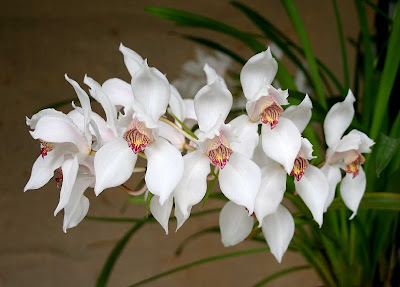 What is really interesting in this hybrid is the way the characteristics of the parent combine in each different seedling. The most obvious characteristic is the shape of the flower. More like the C. erythrostylum parent, being basically triangular with petals pointing forward, but this varies in the three forms pictured. The red and peachy cream form show this most markedly but it is still obvious in the pink form. the labellum is typical of what you would expect of a C. erythrostylum hybrid, a little on the smaller side, strong diffentiation of the sidelobes from the mid-lob, and sidelobes the embrace the column. The convergent callus ridges are also characteristic of first generation C. erythrostylum hybrids. It is interesting to note that in this case C. erythrostylum strongly influences the position and configuration of the red patterning on the labellum, which is generally arranged in lines and increases in intensity and density toward the edges of the labellum. Of course, the labellums on the paler flowers more closely resemble the C. erythrostylum parent and the red flower more closely resembles the C. Kusuda Shining parent, even to the point of having yellow base colour on the labellum and confluent red patches toward the edges.

Most interesting to me is the overall colour of the flowers. How is it possible to get pink, red, peach and light yellow from this cross? It all gets back to the actual colours in the parents! I emphasize the term actual colour as opposed to perceived colour. Cymbidiums, like many other familiar garden flowers, including Rhododendrons, Oleanders, Roses and Carnations have petals that are made of layers of cells, each layer having the possibility of containing different colours. As is the case with Rhododendrons and Azaleas, the underlying or 'base' colours of Cymbidium are white, yellow and green. Overlying colours are white, yellow, green and red (pink being diluted red). One petal, the dorsal petal in Rhododendron and Azalea and the labellum in Cymbidium, has the potential to have markedly different combinations of colours then the rest of the petals/sepals. Some plant physiologists think and in some cases have proved that colour inheritance in orchid labellums is quite separate to colour inheritance in the other flower parts (think of the Cattleya alliance).

If you look closely at C. Kusuda shining it is evident that the base colour of the flower is yellow overlaid with red spots. Cymbidium erythrostylum is of course sparkling white with a tinge of pink/red at the base of the petals and sometimes a flushing of pink on the backs of the petals and sepals. What we see in C. Kusuda Shining X erythrostylum are white, cream or yellow base colours variously overlaid with red creating the impression of peach/salmon, pink or red. You don't have to look too closely in this hybrid to see either the base colour or the overlay colour. If you click on the individual pictures you can see the photo at a larger size. I hope you enjoy the pictures.

George made a very interesting observation regarding the floriferousness of the three plants illustrated here. They were all first flowered seedlings in 6"pots. The pink one, that the majority of orchid society people immediately took to, based on a picture of the flower only, is in fact the least free-flowering of the three. The pink only had one spike on the largest plant of the three. The creamy-peach one had a couple of spikes but the flowers were more numerous on the spike and better spaced. Most fascinating though was the red one. The plant was the smallest of the group but this little powerhouse had 7 flower spikes all fighting for space and attention. It was positively bursting with buds and when it is fully expanded will make a real knockout plant. You can see from the final photo it is certainly the most attractive of the lot and dare I say has the best qualities for commercial development. What about the shape I hear you saying. The general buying public and others seeking novelty and interesting shapes in Cymbidium, care little for the formalized strictures of the judging panels of orchid societies. These non-orchid society orchid consumers look for colour, free-flowering, compact size and of course colour, colour, colour! Perfection of shape of the flowers alone mean little to the general consumer. 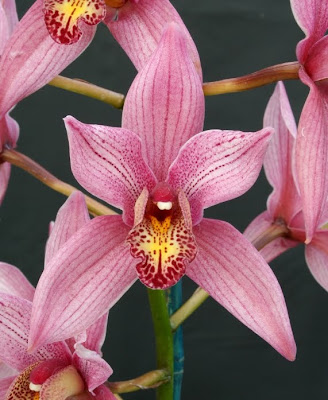 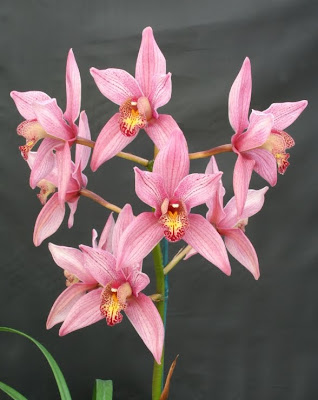 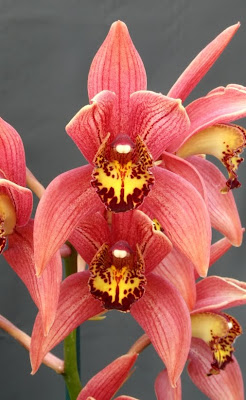 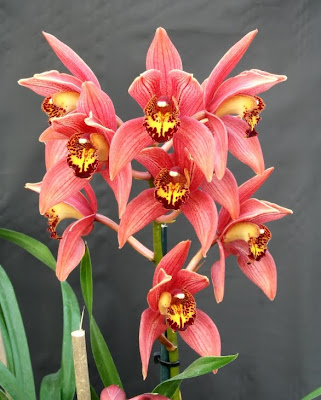 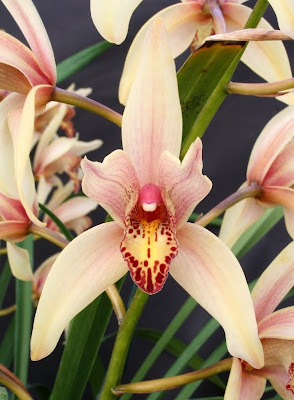 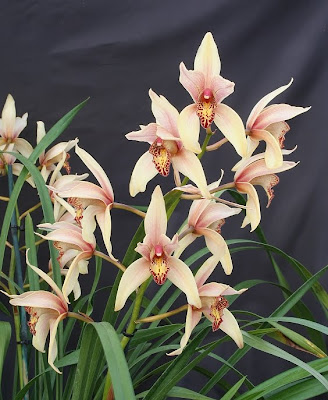 Cymbidium Kusuda Shining X erythrostylum
As a record of my special day in Oxnard, the timer was set on the camera and a little group shot taken of my friend and I and his wonderul hybrid. You can see by the smiles on our faces that we were having a great time. George is such a generous and great friend. I can't wait until we see each other again at the Santa Barbara Orchid Show. Did I mention that George is the breeder of the wonderful hybrid discussed in this blog? 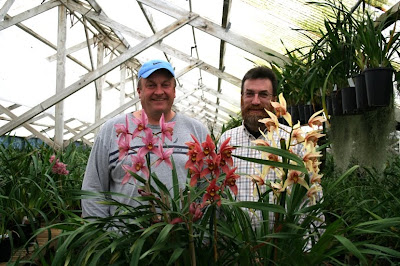 George Hatfield (left) and Randall Robinson (right)
with a group of Cymbidium Kusuda Shining X erythrostylum
Posted by Chuckie at 11:55 AM

What an amazing cym!

Great story Chuckie! What a great turn of events to get you there!

Thanks Kobsukh, but the thanks has to go to George! Seems to me to be a very inspired cross. I can't wait to see the other seedlings out of this cross. If this is the range from just a few, the possibilities are amazing. Maybe Kusuda Shining with C.dayanum, or C. Osborn or even the yellow-lipped C. wenshanense? Now I am really going off on a tangent.

Hey Orchid Obsessions, It was meant to be! The orchid gods were definitely sitting on my shoulder that day.

I've interested in this cross and the lovely colors. Was it the 4n of erythrostylum that was used? and so far I do not see the cross as registered in RHS when i look up the grex parentage..curious .. Did GH not register it??