Critters around the house

As you will be aware by now, I live on a block of land that is basically a private nature reserve. The Trust for Nature has, over the years, assisted residents in the area to put conservation covenants on their land titles. The covenants are an agreement between the landholder and the State Government that ensures that the land will be used for conservation purposes and that it will not be cleared for other uses.

It is very fortunate that there are many of the properties in my area have conservation covenants. The land area covered by these covenants is large enough to support a wide variety of plants and animals. In previous posts orchids have featured but they in fact are a small part of the total number of species that occur here. While sorting out photos for storage, a number of photos taken out of the kitchen window or within a few metres of the house caught my attention. The majority of photos in my collection are of plants. These photos where of the other animal residents of the 'block'.

The kookaburra pictured below until recently was a visitor to the block. It, and its partner were resident to the property next door until recently. The couple that lived there feed the pair of kookaburras cheese on a nearly daily basis. Unfortunately, the wife became ill and passed away last year. The husband, also of a ripe old age and not in the best of health, started to have periodic trips away to visit relatives. While the husband was away the Kookaburras where not getting their daily dose of cheese. These tame and human habituated animals decided to try out my back door to rap on with their large beaks. Begging is such an unbecoming act for such noble animals. The husband has now moved out of the neighbourhood and the Kookaburras have taken up residence on the block I live on. They have a daily ritual of flying to certain trees around the block and singing loudly to mark their territory. One of the branches that they ritually use is positioned about 4 metres from my back door and at eye level. I can stand at my kitchen sink about an hour after sunrise and hey presto the Kookaburras appear. The picture below was taken on a winter morning a couple of months ago. 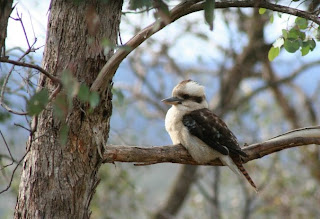 A few metres down from the woodstack next to the driveway is the burrow of the Echidna. These increadibly short-sighted animals spend hours roaming around the blocks of the area sniffing out ant nests and eating as many of their residents as they can. It is not unusual for these amusing fellows to crawl into the birdbath in summer just to cool off. One day I was sitting in my office and noticed this Echidna doing something I had never seen. It was climbing a fallen tree and ripping open the dead wood to make a lunch of the termites. It spent hours doing this and I spent hours watching it. 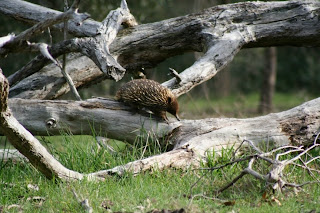 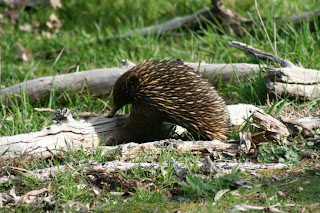 Not all of the creatures on the block are as conspicuous as the Kookaburra or the Echidna. One of my favourite creatures is the Jacky Lizard. It is in the Dragon group of Lizards (Water Dragons, Bearded Dragons, Earless Dragons). One day while reading a book in the Bungalow there was a bit of a commotion on the other side of the window I was sitting at. A Kookaburra had landed on something, literally less than two metres away from me, and was desperately trying to get a grip on it. It turned out to be a Jacky Lizard. The Kooka flew up to a branch with the lizard in beak and proceeded to kill the poor creature by banging it against the branch, This gruesome behaviour is normal for these carnivorous birds is even more spectacular when they catch a snake!!! Thankfully, this was not the last Jacky Lizard on the block. The little fellow below, well concealed against the backdrop of dead leaves was photographed in the same place that his fellow lizard met his fate. If your eyesight is not all that great you may have to put a magnifying glass against the screen. The lizard is smack bang in the middle of the photo. The head points to the right and its tail stretches out to the left. 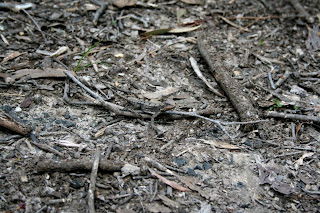 Kangaroos are by far the most common large species in our area. It is not unusual to see mobs of 50 or more sleeping on the hill below the house or munching on grasses on the farmers property next door. That is until the farmers' son decides to chase them off with his motorbike. Most of the mob are fairly mobile and tend to follow well worn tracks around the place that link up good feeding grounds. A few years ago a neighbour who rescues joeys when their mothers are killed on the road, released a young female back into the wild to rejoin the mob. Unfortunately, after spending so many months in the loving care of humans she was reluctant to hang out with 'wild animals' . She moved away from the shelter and right up to the area between my house and the farmland. She loves it there and seems to not mind spending most of her time without the rest of the 'roos.

This particular female has been hanging around the house for a couple of years and sometime last spring gave birth to a joey of her own. Neither the mother or the joey are the least bit afraid of my partner or me . One sunday morning while we were making pancakes Mamma 'roo and joey were having breakfast just outside the window. They completely ignored me as their pictures were taken. You can see the wheels of my car in the background! This pic was taken in autumn so the joey is a bit more filled out (fat) and permenantly out of the pouch, compared to gangly and ungainly and still being mainly carted around in the mothers pouch. Mamma is below with a big tuft of grass poking out of her mouth. 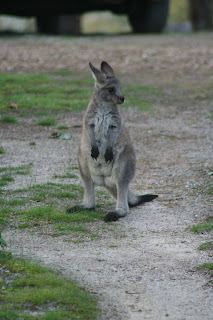 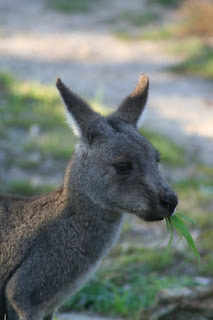 Thank-you so much for a wonderful insight into the colourful characters that quite literally are the 'wild pets' (!) in your yard! The story is fantastic, and the photos are beautiful, especially the close-ups of the Joey and his Mom chomping on a blade of grass!