I have a bit of a reputation for going in for the 'not the usual'. This particularly applies to my choice in Cymbidiums. The most popular Cymbidiums are the large and showy exhibition style, the truly bizarre spotted or peloric ones or the densely flowered pendulous types. Less common types such as those classified as the 'Asian Style' have not really caught on in the west. The reason for this seems to be that they have a tendency to have smaller more star-shaped flowers. Some believe that they have short-lived flowers. Most however have fragrant flowers of interesting colouration on plants that are generally small and compact. The Asian sensibilities, at least in times gone by, have valued the appearance of the plant, particularly if they have variegated leaves. Fragrance of the flowers and bizarre flower forms are also greatly appreciated.

My friends are well aware of my choice in Cymbidiums and have the pleasant habit of alerting me when they see something they think I would like. My close orchid friend that has a commercial nursery is especially kind when it comes to looking after my interests. We have a fortnightly 'orchid play time' at his nursery. We spend hours wandering around assessing and discussing the good and bad points of the orchids that are flowering in his greenhouses. I usually bring along some of my plants that are in flower and we discuss them as well.

One time a couple of years ago on the night before our meeting my friend sent me a picture of a plant that had just come into flower. He said if I could identify the parents, the plant was mine. I failed miserably but he gave me the plant anyway. The one parent of the plant was C. Kusuda Shining that ever popular warmth tolerant stunner from the stable of Andy Easton. The other parent was one of the most popular species Cymbidiums in Japan, China and the surrounding countries - Cymbidium virescens (goeringii). More specifically, the parents are C. Kusuda Shining #4 and C. virescens 'Alba'. Oh, and did I mention that this cross was made by the originator of C. Kusuda Shining? Your guess is right, the prolific and ever-interesting Andy Easton!

I got so excited by the first flowering of this hybrid, the yellow flower at the bottom of the page, that I never stopped nagging my friend to find the rest of the plants and immediately turn them over to me!!! Needless to say he didn't. After a while though a couple more flowered and he started to take my interest as a signal that there might be something worthwhile in this cross. One day when I turned up we went to the area in one of the greenhouses where he thought the plants of my interest were kept. We spent the next little while sorting through hundreds of plants until we found every last pot of this cross. He didn't give me these either. We loaded them all up on a cart and took them up to the potting shed. We parted company for the day and I gave up hope of ever getting another plant of the cross.

A few weeks later when I turned up a miracle had happened. All of the original plants had been given individual numbers and were repotted. Those large enough to be divided were split and any spare backbulbs were potted up, all labelled with the number of the original plant. There was a tray of 3" pots and a few stray larger pots sitting to one side of the rest of the plants. All sported numbers that where duplicated in the main group. I wished but didn't say anything. My friend didn't mention a thing about the plants and we headed off to look at his other plants. Just before I was about to leave he said 'You better not forget your plants' and pointed to the tray and strays. So much for retaining composure! It is not very becoming for a 50 year old man to behave like a 5 year old.

Cym Kusuda Shining #4 X virescens 'Alba' has to be one of the most diverse and exciting crosses that you could imagine. All of the plants below came out of the same seed capsule. Only 6 have flowered for me so far, 5 of them pictured. The 6th is not only an ugly little runt the colour of baby poo but my supposed friend decided to name it after me. What an embarrassment. Thankfully, the ones in the photos are all great growers with tall spikes on compact plants. All are fragrant and last a reasonable length of time. My favourite is the yellow one at the bottom and the peach coloured one in the middle. Both get multiple spikes from the pseudobulb and flower at least twice a year. The little pink one (second photo) is the smallest of the cross the whole plant being just barely 15 cm tall with leaves to only 10 cm tall. The others have leaves that are 20-30 cm tall with flower spikes to 60 cm. Surprisingly, they all have about 7 flowers per spike, except for the little pink one that has only 5.

I look forward to seeing what the rest of the plants look like. If these ones below are anything to go by who knows what may come out!!! 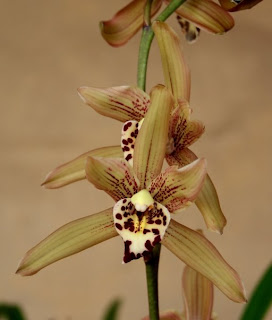 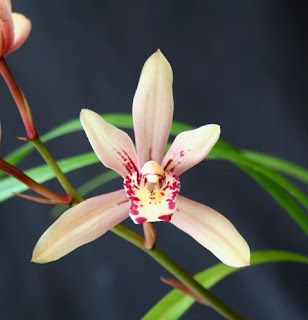 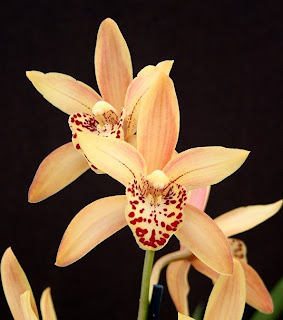 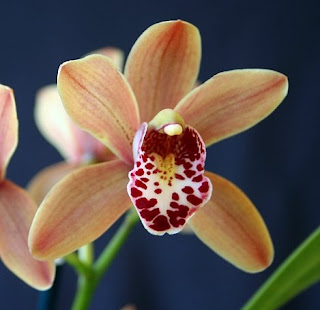 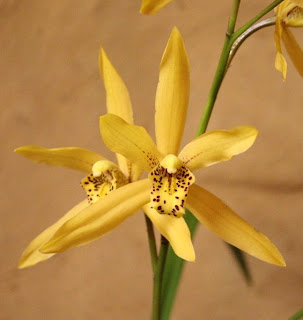 Just incredible to think such an amazingly diverse range of cyms could come from the same seed capsule! Your persistence and eye for the unusal has sure rewarded your efforts handsomely!