September of 1981 was a turning point in my life. It was the start of a year-long field study of orchids in the wild. My supervisor Phil Cribb and I had worked out an itinerary and meticulously planned out places to visit, people to see, where my monies would be deposited and what tasks would be carried out. Part of my task was to collect plants, both living and pressed, that would eventually make their way back to the Royal Botanic Gardens Kew. There was a bit of argy bargy working out where to go. Phil wanted me to carry out an extension of his work on various groups of orchids in Australia and the Pacific Islands. My dreams and ambitions had always focused on Africa and Asia. Jane Goodall was a hero of mine and in my young mind visualized myself exploring the African bush finding and working with strange and unusual plants. There was also the desire to follow in the steps of the great collectors of the 19th century and discover wonders in the mountains of Thailand, Vietnam, and India. What is the saying? Be careful what you wish for it may come true. They did come true.

After boarding the plane at Heathrow Airport it was a relatively short trip to Durban in South Africa. The destination of Durban does not seem like a logical first choice to see orchids in the wild but the Orchid Congress being held there was a good incentive! An orchid congress is a great place to meet all sorts of orchid freaks, see an amazing array of plants and listen to a very large number of orchid talks. It was little piggy in orchid heaven. All day and night the conversations focused on orchids.

Being such a young thing in a world of much older people posed certain problems. Most of the participants were three times my age. Pierre and Thelma Joubert came to the rescue. They were the organisers of the congress and were not only well organised but extremely generous and friendly. Pierre kept me more than busy the whole time I was there. Thelma introduced me to people and their plant collections. Their fellow committee members Lance and Carmen also provided numerous opportunities to participate. Carmen asked if I would like to be steward on the Oncidium Alliance judging panel. The yes flew out of my mouth before she even finished her sentence!

One night while we were having drinks and nibblies Pierre asked me to come along on their post-congress trip. One of the members had to cancel and there was a spare ticket. This involved a break in my itinerary but Phil agreed to it. A trip to the private game park Motswari sounded a great idea. Not only could I see orchids but all the African Wildlife as well. Frank and Ruth Shride from the USA would be accompanying us to work on an article. They were writing an article for National Geographic on the white lions of Motswari. You can imagine how inadequate I felt in the company of such luminaries. Thankfully, I don't suffer from shyness and the others did not suffer from egomania. The stories from that trip will have to wait for another post but suffice to say we saw heaps of plants.

When we got back to Durban I spent a few more days traveling around the local area with Pierre and Thelma's son Richard. He was only slightly older than me and just as friendly as his parents. We travelled north and south, about as far as you can go in one day and still be back for dinner. The plants we saw were fantastic. Streptocarpus, Protea, Strelitzia, Erica, Aloe, heaps of bulbous plants and of course orchids. I didn't know there were so many Eulophia species!

The next leg of my journey took me to Johannesburg. The change in altitude played havoc with me. Five-thousand feet does not seem like a very high elevation but for someone who never really spent much time above an elevation of 500 feet, it was a great change. The head spun, the stomach churned and all I wanted to do was sleep. Thankfully, that only lasted a couple of days. My host, Daniel Kleynhans, was not only gracious but understanding. Daniel delivered me to the Botanic Gardens where I was to meet up with Doug McMurtry. Doug had organised a trip that would see himself, myself and an artist named Barbara Jeppe tripping up to the Drakensburg Mountains in search of various plants.

Barbara was an absolute hoot to travel with. We would be belting along at 80 Km an hour down some dirt track in the middle of nowhere and Barbara would scream out 'Stop!'. Doug would slam on the anchors, stop and then reverse until Barbara commanded him to 'Stop'!. The doors of the car would fly open and Doug and I would rush like mad people following a madly smoking crazy woman across a dusty treeless plain looking for God-knows-what. Thankfully, the very first time she did this we came across a ripper of a plant, Boophone disticha. Boophone has a large , perfectly-rounded heads of hundreds of scarlet flowers on a naked stem that shoots straight out of the earth. At flowering time the leaves are totally dead and in most cases missing. This was just the first of many beautiful bulbs, orchids and other fabulous plants that we would come across. We got a thrill every time Barbara screamed.

As I said at the start of this post my trip to South Africa was a turning point in my life. It also made a huge impact on my life choices. Since that auspicious trip, my interest in South African plants has become and remained strong. That very first sighting of Boophone lead to my life-long interest in South African Amaryllidaceae and Amaryllidaceae as a whole. Seeing Pelargonium and Aloe in the wild, subsequently lead to nice collections of these appearing in my garden. Interestingly, there is a pot containing Boophone disticha sitting on the corner of my verandah just outside the kitchen window.

Every Autumn there is a strong reminder in my garden of my trip to South Africa. The first of the South African Amaryllidaceae to flower are the Haemanthus species, followed by Amaryllis and finally by a three month long eye-popping flowering of the various Nerine. Below are just a couple of species of Haemanthus that grace my garden. These two species flower regularly and easily. Several other species in the genus and in my garden require fire to burn over the top of their bulbs to stimulate flowering. 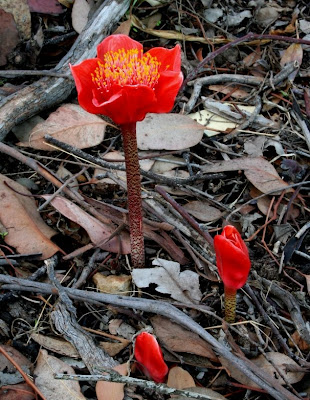 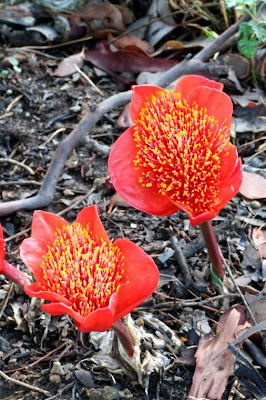 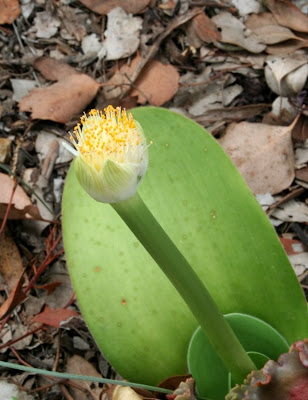 Haemanthus albiflos Broad-leaved, early-flowering form.
Posted by Chuckie at 4:37 AM

Mine missed flowering but are putting out leaves.

Wow...what an amazing experiences you have had in your life. I can only dream of visiting South Africa, let alone going off into the wilds of Drakensburg. What a captivating post! Thanks Chuckie!

Are those Haemanthus still coming up for you? What zone are you in? I have an albiflos in a pot; never considered putting it in the ground. I think our slugs would devour those succulent leaves.

Thanks for the comments Hansenkd. Funny you should ask if the plants are still coming up! The large-leaved form of H. albiflos is just opening its blooms. The tips of the H.coccinea flower spikes are just visible. They should shoot up this week and be in flower in about 10 days. A few more species have found their way into my collection since I posted this blog. They are not going to flower this year but should next autumn. We don't have zones here in Australia. Suffice to say, we live in an Mediterranean-style climate with about 600mm of rainfall a year, mostly in winter. Winter temps rarely if ever drop below freezing. If temps do drop below freezing it is usually only for a few hours. The Haemanthus don't mind. Thankfully, we do not have Garden Snails here but we do have a couple of species of slugs. They don't cause the haemanthus much trouble as long as they are not in shade.