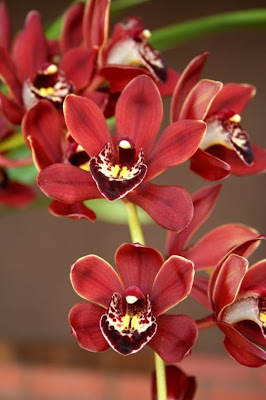 The breeding of true red in Cymbidiums has been a goal of many growers since the inception of hybridization in the genus. One of the first 'Red' Cymbidiums was C. Ceres 'F. C Hanbury'. There is considerable doubt over the true identity of good old 'F. C. Hanbury' but it remains one of the true studs of red breeding. Remakes of C. Ceres, as you can see from the pictures below, are not even close to red, more a pink overlay on yellow or a slightly reddish brown. It is hard to imagine the dark rich colours of today's complex hybrids coming from such lowly beginnings. 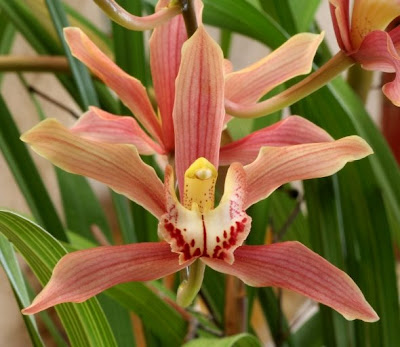 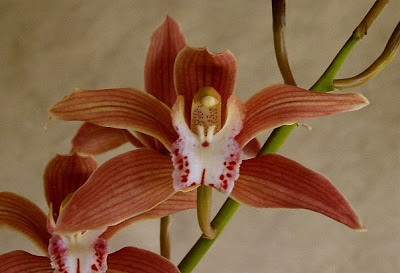 Cymbidium Ceres 'Florence Mausteller' 4N
A very productive line of breeding in reds was kicked off by the production of Cymbidium Ruby Eyes. In 1978, the year C. Ruby Eyes was registered, and the period shortly thereafter, Australia had a bit of a reputation for the production of red hybrids. I remember visiting several orchid nurseries in the early 1980's specifically to see what were rumoured to be some of the best red cymbidiums in the world. Wondabah Orchids was one of these nurseries. Needless to say C. Ruby Eyes came out of the stable of this once world reknown orchid nursery.
Cymbidium Ruby Eyes is the offspring of the most unlikely of parents. Imagine crossing a large showbench standard with intense colour with a miniature species. It is like crossing a Great Dane with a Chihuahua! Luckily, the pod parent was C. floribundum (pumilum) that great species that is not very descriminating with regard to who it will mate with. Unfortunately, if the 2N forms are used there can be problems with sterility in the resulting progeny. The other parent was C. Sensation, another good breeder. Another child of C. Sensation is the beautiful C. Flame Hawk. Below are two examples to give you some sort of idea of what the parents looked like. Neither of the plants pictured are the actual cultivars used to produce C. Ruby Eyes but are probably not far off. 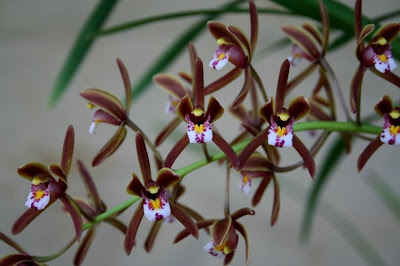 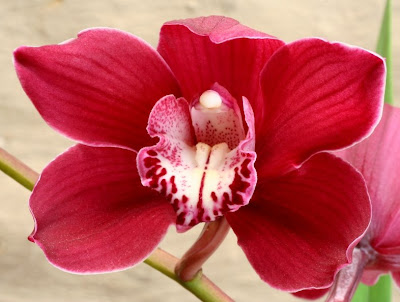 The marriage between C. floribundum and Sensation created quite a stir. Here was a match made in heaven. One of the qualities of C. Sensation that contributed to the success of C. Ruby Eyes is that although the flowers are large and quite normal for a standard the plants are relatively small. Another interesing feature of C. Sensation is that the pseudobulbs are remarkably round, halfway between the size of a handball and a tennis ball. The leaves are relatively narrow for a standard.

There are numerous cultivars of C. Ruby Eyes doing the rounds in the orchid world. The most famous of these is C. Ruby Eyes 'Red Baron'. I will get back to this cultivar in a minute. It is worthwhile to note that there are actually better quality cultivars such as: 'Royal Show', 'Tokushima', 'Paradisea' the list goes on. There are also imposters going under the name of 'Red Baron' . Some growers have taken on the task of coming up with an improved C. Ruby Eyes by remaking the original cross but using different parents. The results have been variable but have not really been an improvement on the original. Several of the original cross are still floating around but have never been named. One of these is a plant that I have grown for years. It did not meet the standard of being a red but it is a pretty plant none-the-less. It will never get bred with because it has a flaw that can be passed on. See if you can work out what the flaw is from the picture below. No it is not a virus that is the problem. I reckon this cultivar actually has a very beautiful labellum, much more clearly and delicately marked than any cultivar I have seen. 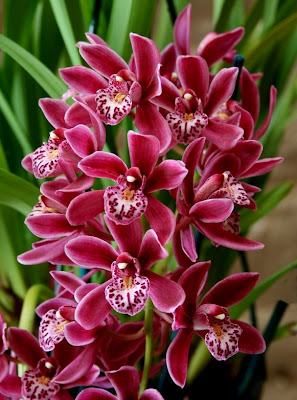 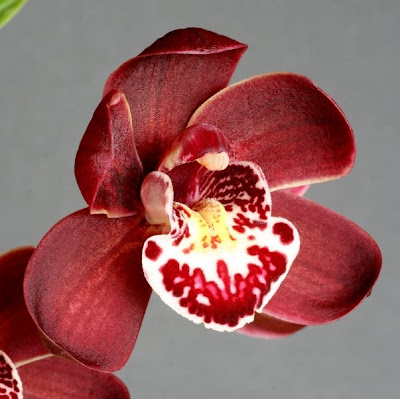 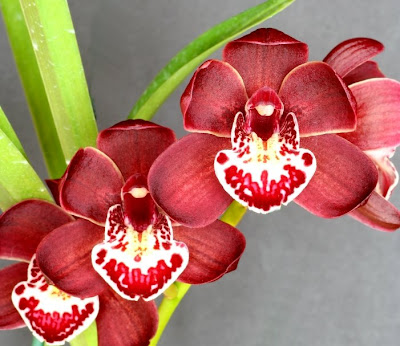 The problem is a that some cultivars suffer from partial petal peloria. This shows up as color breaks in the petals, or in the case of my pretty little plant, callus ridges occurring on the petals. Although in fully peloric flowers these callus ridges would be yellow or white, like those on the normal labellum, those on my plant are a deep black/red. You can also see a partial colour break on the left petal of the centre flower.
This partial peloria can be passed on to progeny. Several hybrids of C. Ruby Eyes, can exhibit this genetic fault. Some that I have seen this mutation occur in are Radiant Ruby, Ruby Doll, Ten Pin and Inky Dink. In one group of seedlings that I have flowered out of the hybrid C. Ruby Eyes X Fascella there were a few that strongly exhibited odd petals. Have a look at the centre flower and the one immediately above it in one of my plants. You can see the deformity along the upper edges of the petals. 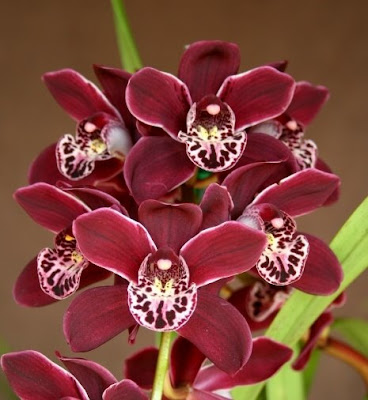 Cymbidium Ten Pin can also exhibit partial peloria but only in some individual plants. Two examples are giving below. The first plant is normal and shows no signs of genetic faults. The second has the remnants of calli on the petals as evidenced by the dark red base to the petals tapering through the whole of the petal. 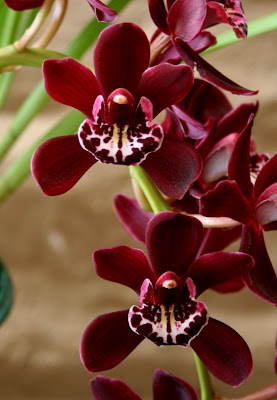 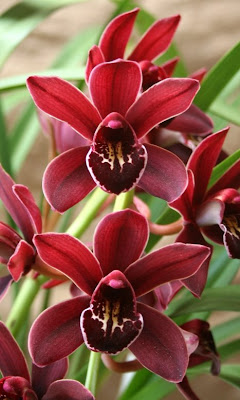 Cymbidium Ten Pin (slight petal mutation)
While many people see Peloria as an interesting phenomenon, I find it a deformity. There are some collectors out there that have collections of both Petal and Sepal Pelorics. To me it is the equivalent of Hip Displasia in German Shepherds. The kennel clubs try to eliminate from the breeding program dogs that exhibit the trait. Maybe we should do the same if we want to breed stable, high quality plants. To this end, I make the outlandish suggestion that we should eliminate C. Ruby Eyes 'Red Baron' from future breeding. I qualify this by adding that those 'Red Baron' with the petal deformity. There is strong evidence that not all the 'Red Baron' out there are the genuine cultivar. If you need an example of this go to your friendly web-based image browser and see the variation in what is called C. Ruby Eyes 'Red Baron'. Be particularly careful when purchasing meristem produced plants. Mass multiplication of orchids through meristem culture is known to cause genetic deformities, many of which are undesirable. Cymbidium Ruby Eyes 'Red Baron' is one of those plants that is mass produced by meristem propagation.

Plants bred either directly or indirectly from C. Ruby Eyes now number in the hundreds. C. Ruby Eyes alone has been used as a pod parent at least 15 times and as a pollen parent at least 80 times. This plant is still being used in breeding programs and will probably continue to contribute for years to come. Its primary use is in the breeding of red pendulous, minitures and intermediate Cymbidiums. This large number of offspring and it's continued use in breeding programs is remarkable considering it is 31 years old. That is amazing staying power for any hybrid. Hopefully if we continue to use this outstanding plant we will select and use cultivars that do not exhibit genetic mutations. If we use 'clean' plants of C. Ruby Eyes and its offspring we will certainly be in-the-black financially but in-the-red in regard to high quality, high colour cymbidiums.

Just as a post script, Here is a picture of one of the offspring of C. Sensation, the very beautiful C. Flame Hawk. 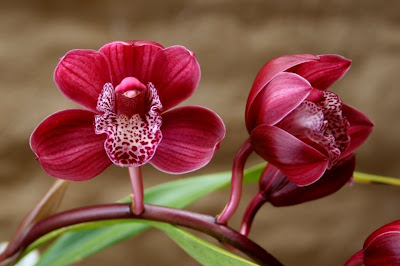 Thanks Chuckie for this fascinating post and such beautiful and sublime photographs! The colours and forms of your orchids are truly amazing!

great job..... really.... it'hard to find a passage reguarding the hybridation of an orchid... thank you...