I can finally announce that the parents of my Guess the Hybrid blog have been found! The parents are C. Sue and C. Summer Pearl. A quick look at the lineage shows that this cross is a bit incestuous! On the Sue side, C. Peter Pan is the father and C. Showgirl the mother. Peter Pan and a Showgirl? Sounds saucy enough. On the Summer Pearl side, C. Peter Pan is the mother and C. Trigo Royale is the Father. So here we have a hybrid that is half C. Peter Pan just like it's parents! Plants are so indiscriminant with who they mate and in what role. 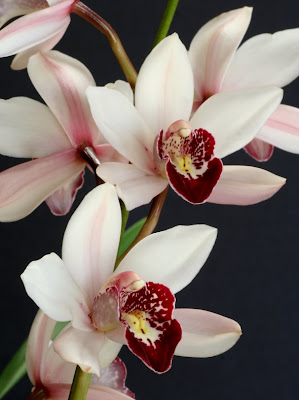 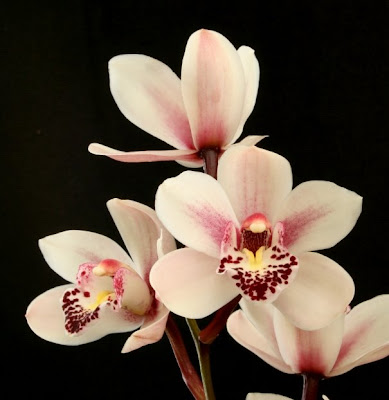 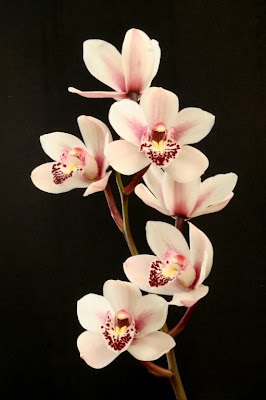 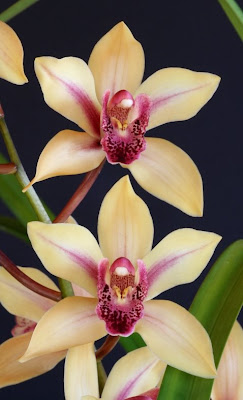 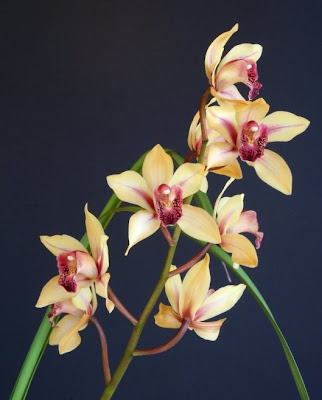 The smaller of two spikes produced
on this first-flowered seedling.

At the moment in the northern hemisphere, Cymbidium flowers are rare. There are a few hybrids and species that flower at this time of year but the main season is well and truly over. Time is at a premium as growers busily repot and spend the majority of their time feeding, watering and keeping critters off their plants. Of course summer is also the time to catch up with family, take holidays and enjoy the weather. Well from what I hear about the east coast of the USA at the moment there is not too much weather to be enjoying!

We here in the southern hemisphere are right in the middle of our Cymbidium season. The ultra-earlies and many of the earlies are finished or finishing and the midseason plants are exerting their influence. We are in Cymbidium Heaven at the moment. Our biggest challenge is keeping up with the staking and grooming. Oh, and taking photographs!

There is a bit of a down-side to the differences in seasons between north and south, especially on the activity on our web-based Cymbidium forum. Most of the members of this web group are from the northern hemisphere. A strong contingent of us are however from the southern hemisphere. At this time of year, we southern hemisphere members are a bit lonely as most of our friends are off doing other, perhaps more interesting pursuits. We l'eft-behind' members try to do all sorts of things to try to encourage our northern friends to pay us web visits.

As I have mentioned in previous posts, one of the little 'games' that we play on the web forum is guess-the-hybrid. George is particularly good at coming up with plants that stump most of the members. Many of these plants are first-flowered seedlings. It is always fascinating to see what the result of a cross is and then work out what the parents are. As with most breeding programs, not all the progeny behave as they should, there are throwbacks, freaks, novel combinations that produce unusual results and sometimes just the odd strange occurrence.

The plant pictured above is my latest contribution to the guess the hybrid game. The clues are:

I hope all of you in the northern hemisphere enjoy this little beauty. When it first came out its full beauty was not appreciated. The true qualities of this plant emerged only after it was brought inside, photographed and then left on the kitchen table. Five weeks later it is still going strong. The smell is almost to the point of overpowering. The morning sun makes the colours sparkle. The subtlety of the colour combinations coupled with the fragrance reminds me of a beautiful Frangipani I recently saw in Adelaide. I am so glad that the advice given to me by a friend, to throw this plant on the compost bin, was not followed. Rightfully so! He now wants a piece of the plant. I think he will be waiting a long time.

It reminds me of Ruby Eyes, but I'm probably way off base.

Congrats on your blog, I only discovered it last night & spent a few pleasant hours reading the back story.

Thanks for the kind words Mike. Will be updating the page soon to show the parents.