Orchid in an unguilded cage

June in this part of the world is one of the most magical of times of the year. Days are short but spectacular. The sun, being at a low angle in the sky, casts the most amazing light over the landscape. The air is filled with humidity. On still, clear nights, heavy dews form and rivers of fog flow down the valleys from the mountains. If the night is lit by a full moon you can see the roiling of the currents in these rivers of white. Actually, you can only see them from the hilltops. Those in the valley are shrouded in the fog. On various nights the depth of the fog rivers vary. On average they fill half the valley leaving the hilltops exposed like islands. You can tell the average fog level by the vegetation that occurs above and below the midpoint. The species composition of these two vegetation types is radically different. Different trees, different shrubs and different wildflowers.
The vegetation of the region is partially dictated by the rivers of fog. The temperature in these fog rivers can be several degrees Celsius cooler than the exposed hilltops. My friends who lives in the flow of one of these fog rivers commonly experiences temperatures up to 10 degrees C. cooler than my place. Frost is common at their house and almost non-existent at mine. Last year they had 40 frosts, we had one. Burt and Sue only live a couple of hundred metres away! You can see their house in the picture below. The ridgeline of their roof is that little bright bit on the left of the photo. 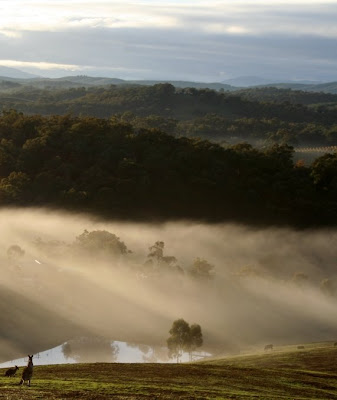 Fog River
(just after sunrise)
On the high dry hills above the fog rivers an abundance of plants thrive. Plants that would die in the frost and humidity of the valleys. Even though these hilltops are crispy-dry in the summer, they have reasonable rainfall in the winter. The Geophytic plants thrive here using their strategy of having underground storage-organs to collect the goodies when they are available and retreat back underground when the times get tough. Several totally unrelated plant families use the geophyte strategy on our little hilltops. Orchids, Lilies and Sundews are the main participants in the seasonal ritual of hide and seek. Pre-eminent of these three groups is the Orchids. Over 55 species occur in just 160 hectares of what most people would think was pretty scrappy dry forest. One of the first species to flower in Autumn is the Tiny Greenhood (Pterostylis parviflora). With flowers less than 1 cm long and the tiniest of leaves it is really hard to see these little devils amongst the jumble of dead leaves and twigs that blanket most of the ground. 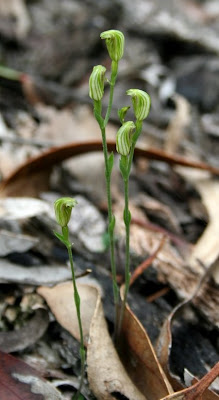 On winter mornings when the fog rivers are flowing, the animals, ever sensible beings, head for the warmer hilltops to bask in the morning sun. Kangaroos graze until the sun is well up and then snooze away the morning sunning themselves. The groups of little twittery birds come up for their morning baths and a bit of breakfast. I should be correct here, these feathered flocks are guilds of unrelated passerine (perching) birds. The groups contain upward of 30-40 individuals of about 10-12 different species. The Tree Creepers hunt bugs under the bark of the trees, starting from the base and working upward. The Sitellas eat the same food but start at the tops of the trees and work down. The Wagtails and Fantails, being flycatchers, do acrobatics as they catch their food in-flight. Buff-rumped, Yellow-rumped, Brown and Striated Thornbills pick invertebrates from the branches and leaves. The melodious tones of the Grey Shrike-thrush ring out after each morsel is consumed from amongst the leaf litter on the ground. The mad twittering mass arrives suddenly, hangs around until everyone has had their bath and in a flash are off to depopulate another area of its critters.

The late arrival, usually by mid-morning, are the White-winged Choughs. They really do deserve their nickname of Larrikins of the Bush. These highly social birds can not do anything on their own and appear to take nothing seriously, except when they launch raiding parties to steal another groups fledglings. Choughs, both young and old, play with their food, are messy eaters and are real gluttons. A Chough will eat just about anything including mouldy bread, compost, any animal matter they can get their beaks into and just about any part of any plant. The birds are real survivors. Oh, I forgot to mention, they show little fear of humans.

Some of the favourite foods of these comical Choughs are the tubers of our beloved geophytes the Orchids Lilies and Sundews. The strategy used by the plants to store carbohydrates provide convenient little packages of concentrated nutrient, ripe for the picking if you can find them. The life strategy of the Choughs is similar to the familiar domestic Chicken; scratch, peck, scratch, peck, dig with beak, peck, scratch. The normal group size of this bird is about 8-12 individuals. A group of this size methodically working through the bush can pretty much collect almost all of the tubers of the orchids in an area that attracts their attention. After they have intensively worked an area they move on. 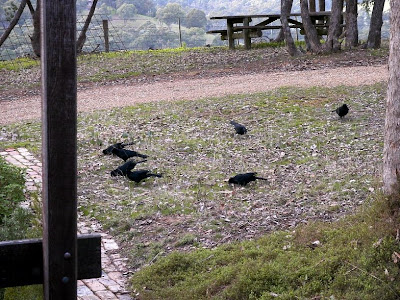 White-wingd Choughs (Corcorax melanophamphos)
Now a population of 8-12 birds working 50 hectares would be about normal for our area. At this density the plants and invertebrates of the area would have time to recover between despoilings. Many of the geophytes in the area are clonal in nature and form huge colonies by sending out numbers of daughter plants from the the mother, similar to the growth habit of a strawberry but with the runners under the ground. Beth Gott, a famous ethnobotanist, studied recovery rates of greenhood orchids after human harvesting. People find the tubers of orchids yummy as well. Beth found that she could remove half of the tubers of a colony each year without effecting population numbers. The numbers of tubers one year later would be back to where they were before harvest! This didn't allow for expansion of the colony but did not send it toward extinction.
Humans and Choughs go together really well. Choughs are opportunists and humans are wasteful and like to have wildlife around them. When this area was developed, humans moved into the habitat of the Chough. Now with many species, mixing with humans disadvantages the animal. Choughs exploited the opportunity and their numbers increased. Group sizes reached 30 or more members and groups could be supported half the area of the original 8-12 birds. How is this? What is going on here? In short, compost bins and purposeful feeding. Everyone had an open compost bin. This provided a nice daily supply of kitchen scraps and a big dump of stale bread and refrigerator cleanings once a week after the shopping. A few supposed nature lovers enjoyed the humanlike behavour of the Choughs that involved lots of displaying, grooming, napping, squabbling and playing. How to keep them around? A daily feed of bread, wheat or oats.

Problem. What happens when you quadruple the population of an omnivore and then stop their supplemental food supply? They revert to their natural food. The minimal impact they used to have on the orchid population on our little hill turned into a full-on assault and pillaging. When one of the neighbours who daily fed sacks of bread to the Choughs moved out, the orchid population plummeted.

Being an endangered species it was not possible to control the Choughs through direct methods. How to you re-balance an out-of-balance species? We used the multipronged approach. Put simply, covered compost bins, no feeding of Choughs and protect the Geophytes from predation. Unfortunately, this was going to be a long process and there would be further losses of the orchids. Fifteen years later and the populations of Choughs are getting back to their original numbers. This may have been helped by the ten years of drought we have been experiencing. Another negative side effect is the bushland is littered with wire cages, not to keep the Choughs in but to keep them out. The orchids are the ones in the cages. 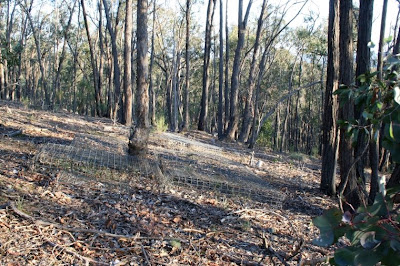 Wire exclosures protecting colonies of orchids
Within the cages, away from the digging beaks of the Choughs, the orchids thrive and bloom. These delicate little plants, many of them only centimeters tall, carpet the ground inside, but are scattered in ones and two outside the cage, usually with their tubers firmly buried in a crack in a rock or beneath a dense tuft of grass. The fact that they are starting to show up outside of the cages is an encouraging sign. The 'escapees' are a new phenomenon, only appearing in the past few years and corresponding to the drop in Chough numbers. 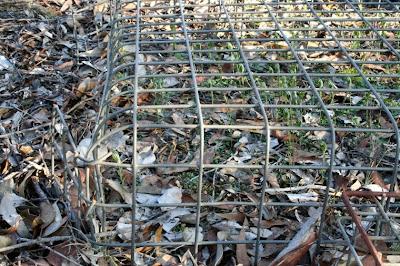 Nicholls Greenhood (Pterostylis sp. aff. striata)
Inside the cage they thrive.
One of the orchids that occurs in these cages is an undescribed species of Greenhood Orchid that flowers in Autumn. It has gone under various names in the past in an attempt to shoehorn it into an existing described species. It has been called Pterostylis alata, P. striata, P. sp. aff. alata and P. sp. aff. striata, usually with an area description afterwards (e.g. Northeast Melbourne Foothills) . It is presently being formally described and named after a famous orchidologist who wrote the seminal book on The Orchids of Australia. 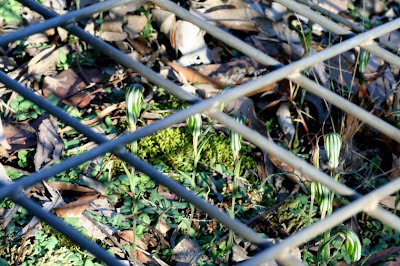 Flowering well under the cage. 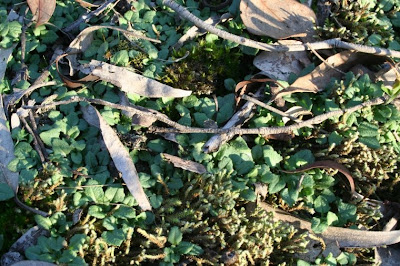 Rosettes growing densely in moss under the cage. 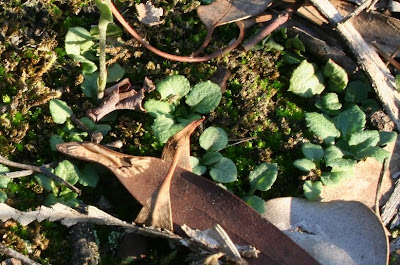 Rosettes are barely 2 cm across but the leaves are
beautifully reticulated with wavy edges.

Several years ago a small colony of Nicholls Greenhood re-appeared after many years of absence. Instead of racing home and grabbing one of the normal wire cages to protect the plants I decided to try something different. This time I took an old dead shrub and placed it over colony. Just enough protection that it would make it difficult for the Choughs to want to bother moving a dead shrub. Leaves are easy to move when you have a beak but not branches. There were three plants when the colony was found four years ago. Three years ago there were 11, two years ago 35, last year 62 and this year I stopped counting at 100. I reckon there are nearly 200 now. Finally an example of expansion not just holding ground. The plants are not as densely packed as the plants in the cages but the individual plants are nearly twice as large. The leaf little builds up faster outside the cages and may alter the distribution of the species within a given population. 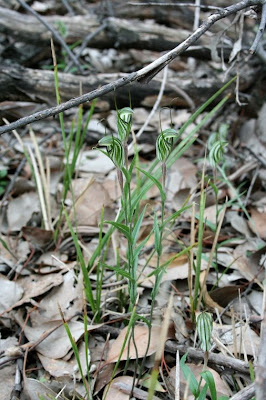 Free at last!
Outside the cages. 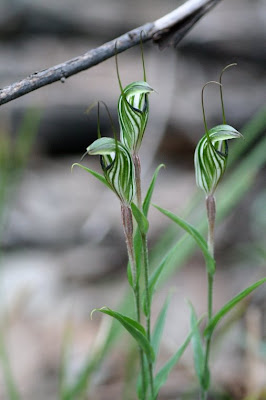 Looking all happy and perky,
obviously enjoying freedom.
While it is encouraging to see plants escaping from the cages it would be premature to rejoice too much and free the prisoners from their jail. These cages will for the foreseable future be necessary until the plant numbers recover sufficiently to allow natural predation by the Choughs. In the meantime we celebrate little victories.
Posted by Chuckie at 1:19 AM