The internet is a wonderful thing. It has allowed me to communicate with people all over the world that share my interests. Mostly, this communication has been with plant people. Over the past couple of years I have been involved with a forum that deals exclusively with the plant genus Cymbidium. Believe it or not there of several of these forums but the one that I belong to is the one for advanced growers and breeders of these wonderful plants. I used to belong to the general forum for cymbidiums. Can you actually have a general forum for a specific topic? Well, you can. In the general forum there were a lot of people who were just getting into growing and would ask questions that most of us in our 'advanced' forum dealt with 25 or 30 years ago. It can get a bit tedious in a general forum when you really want to get into some seriously challenging discussion.

Over the period of involvement in the Cymbidium forumI have developed some serious pen friends. It is amazing how much you can get to know about certain aspects of people by communicating with them nearly daily, even if it is on the net. We even get to the point of teasing each other about our tastes in plants. Last week one of the guys on the net, (I have actually known this guy for nearly 30 years) mentioned that a plant was very 'Chuckish'. He was referring to my taste in reference to the general form of a Cymbidium flower that was inferred from my various postings on the forum. A couple of days later one of the other members posted a picture of a plant that he labelled 'Ultra Chuckish'. I had been turned into an adjective!!!

The summary of my taste in plants created a good laugh for me. Here I am going along thinking that there is some sort of protection and anonymity on the net. Well after two years of posting they know everything! The good thing about this 'knowledge' is that people actually alert you to certain plants that you may like, based on what they think you will like, gleaned from your postings. Interestingly, nearly 100% of the time they are absolutely correct.

My friend, who lives near me and who drops into the forum as a guest once-in-awhile, gave me some plants several years ago that fit the category of 'Ultra Chuckish'. One of the characteristics of Chuckish is spidery flowers. These types of flowers are not much appreciated in the western countries but are greatly appreciated in Asia. Another characteristic, again shared between myself and the Asian growers, is fragrance. Large, boofy perfectly rounded flowers with no fragrance are not for me. I like my orchids to look like orchids, not artificial, highly bred, showbench plants. The plants I grow will probably never end up with an award. To me though, they are stunning. This is why I grow the plants, for my pleasure, not awards.

Back to the plant my friend gave me. It is called Cymbidium Maureen Carter. It is a beautiful creamy white albino, with spidery flowers produced on bolt upright spikes. The plant is very free flowering and is a really strong grower. I loved it before I knew its history. Oh, it is also fragrant. This is where the net comes in. The plant was bred by my friend Andy Easton, who also bred the wonderful Cymbidium Kusuda Shining (the subject of an earlier post). Andy is one of the mainstays of the forum and has been a greater or lesser part of my life for longer than I would like to admit. Cymbidium Maureen Carter is named after my friend Cliffs Aunt. Cliff is also a mainstay of the forum. How do these men know each other? Well they both used to live in New Zealand and they were friends there. They are back together again on the forum even though Andy lives in the USA and Cliff in Australia.

So how did this plant come about and why when I look at other peoples plants of Maureen Carter do they look so different? The original plant was made with an albino Cymbidium sinense and Sleeping Beauty, itself an albino. So the plants would all come out albino and should be pretty consistant? Well it all depends on the type of albino you use. There are white, green and yellow albino forms of C. sinense. There are also diploid and tetraploids of most of them. Sleeping Beauty also comes in diploid and tetraploid forms and although generally pure white there are forms with pale yellow on the labellum (they are still albino though).

One of the difficulties with registration of orchids is that only the original grex name applies for registration purposes. There is no way to know what form of a plant has been used. For all we know C. Maureen Carter could be made with a dark brown form of C. sinense and a white and yellow albino of Sleeping Beauty. Thankfully, we do know what the original plant was bred from. The sinense used was a white albino and the Sleeping Beauty was also a pure white albino. As is the case in any breeding you can get slight throwbacks and a bit of yellow does show up in the newly opened flowers of C. Maureen Carter. Interestingly, both of the parents were diploid which means that the offspring were also diploid and fertile.

As is the case when something wonderful is created, someone else wants to have it. If they can't get hold of the original plant they remake the hybrid. This is where the skill and knowledge of the breeder comes to the fore. When this hybrid was remade, and it was remade several times, various yellow and green albino C. sinense were used and only the diploid forms. The tetraploids forms of sinense are very rare and exceedingly expensive, those who have them don't let just anyone have them. Unfortunately, the tetraploid forms of sleeping beauty were used in the remake. The result was a mishmash of yellows and greens with indifferent shape and poor coloration. Another real bummer was that all of the seedlings of these diploid X tetraploid crosses were triploid and sterile. Dead ends for breeding!

If you do a google search, for Cymbidium Maureen Carter you will see some of the products of these low quality crossings. Only one picture will come up that is close to the original and that is on the Santa Barbara Orchid Estate website. This last plant is closest to the original that was used by Cliff when he registered the cross. Cliff used C. Maureen Carter 'His and Hers' for registration of the cross. The SBOE plant looks as though it is probably from the original cross. A proper assay would have to be carried out to see if it is a diploid, triploid or tetraploid and therefor capable of breeding. There are a couple of yellowish-green Maureen Carters with the cultivar names 'Dafon' and 'Orchis'. There is even a lurid yellow cultivar called 'Fragrant Princess'. This last one has none of the charm of the original cross and also has a story that goes with it that does not bear repeating in polite company.

The photos are not of the best quality and my photography teacher has given me a 'Could do better' on my report card. Oh well, they were taken before I was getting lessons. I promise never to use a brown sheet as a backdrop for a white/cream flower ever again. and I will improve the light! I must thank Andy and Cliff and my friends on the forum for encouraging me to keep writing these stories. Undoubtedly, they will correct any of my factual errors before you read this post! 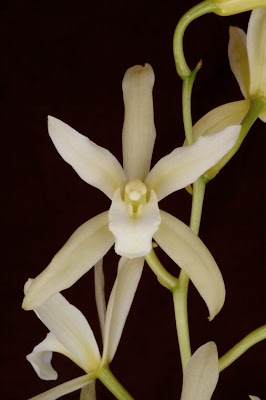 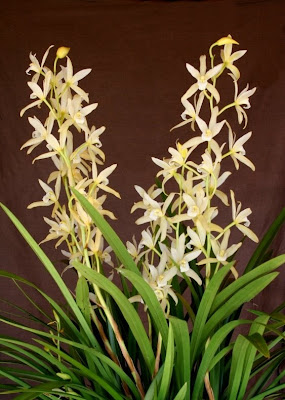 Cymbidium Maureen Carter 'Chichester'
Posted by Chuckie at 2:39 AM

Such an elegant, beautiful and delicate orchid is C. Maureen Carter. Thank-you so much for the wonderful stories and photos - even if your photography teacher gave you a 'pass', I reckon your images are stunning!