When it comes to growing classy plants there are few that can match up to the genus Clivia. Everything about them is refined. They are of modest size and modest in their growth rate. The leaves are broad, dark-green straps that in the best forms sit neatly in a fan, one stacked on top of the next, in the form of an open book. The flowers arise from the centre of the plant on a long stalk forming a head of up to 25 or so flowers that nestles just at leaf height or slightly above it. The flowers are not subtle, being bright orange, yellow, red or a combination of these and varying in intensity. The flowers, however, are very regular in shape, at least in the most popular Clivia miniata. The plant in flower looks like an artificial plant. The genus even has royal connections, being named after Lady Charlotte Florentia Clive the duchess of Northumberland. The name of the genus is therefore pronounced Clive-e-a, recognizing the name of the person the plant is named after, not Cliv-e-a!
My first experience of Clivia was at Longwood Gardens just outside of Philadelphia. This huge display garden was set up by Pierre S. DuPont and is carried on today by a committee of management. Longwood is one of the worlds premier gardens. A major feature at Longwood is the the huge set of conservatories. These are large enough to support trees and lawns and expansive beds of ever-changing displays of stunning plants. Each season there is a different set of plants to brighten up the conservatories. In one of the conservatories there is a huge water display, including fountains set amongst landscaped gardens. At one end of this conservatory is a large terrace on which to sit and admire the scenery. On either side of the entrance door there are two huge earthenware pots imported from China and tastefully decorated with patterns. In each of these pots is a creamy-yellow form of Clivia miniata. I might add that the pots are about one metre across and the leaves of the plant arch out over the edge of the pots by about 1/2 metre. These are seriously impressive plants, attractive even when not in flower. When in flower they are breathtaking. The individual cultivar grown at Longwood Gardens is one of the most sought after cultivars of Clivia miniata. A division of this plant sold for US$2200 at the Longwood Gardens Rare Plant Auction held by the Professional Gardener Alumni Association in 2000. 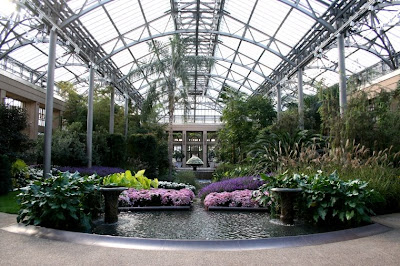 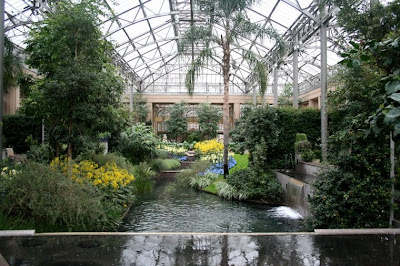 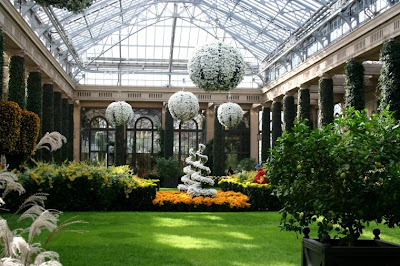 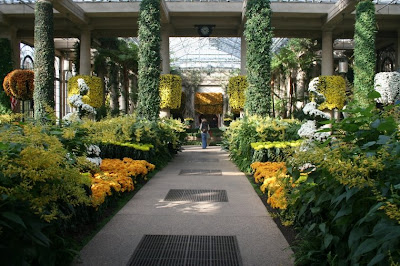 West Conservatory and Fern Floor (in distance) November 2007
My cousin Haydon is in middle of path. The yellow, white and orange flowers are Chrysanthemums!
It was not until several years ago that I actually aquired several plants of Clivia. About 10 years or so ago, Clivia started to flood onto the market here in Melbourne. They became the new fashion in gardens. They became so common that you could buy them in nearly every outlet that sold plants, including supermarkets! Shortly after the first flush of poor quality Clivias hit the market, better forms started coming from more reputable growers. Cultivars such as 'Twins', 'Monk', 'Painted Face and others had wider, shorter and neater leaves and larger, well-shaped orange flowers. Some clever dick predicted the trend for novelty and flooded the market with seedling grown yellow cultivars. These commanded seriously high prices and still do. A seedling with 6 leaves and about 30cm high cost approximately $40. Most of these were several years off flowering. I wonder how many of them actually lived to flower? Yes, I bought one.

My other purchases were several cultivars imported from Japan by a specialist. These were bought as seed for $10 each! Thankfully, Clivia seed is very easy to raise as long as you have the patience. These Japanese Clivias are now 10 years old and have yet to flower. One lives in hope. I might add here that the Japanese and Taiwanese grow Clivia primarily for their leaves and not their flowers. This may explain why I have such beautiful plants and no flowers.

My friend Rob, who is a mad Clivia grower, belongs to a Clivia club. Yes, there are clubs devoted just to growing Clivia. These people are even more seriously weird than that orchid people. They see differences where most people don't. They also have bizarre interpretations of what various colours are. I have yet to see a white or pink Clivia that is not truly yellow or orange. Oh well, maybe if their hope is strong enough they will actually believe their plants are white and pink!

About 8 years ago, Rob went on a trip to New South Wales to do the rounds of his Clivia friends. He always drives so that he can bring back a carload of plants. I told him before he left if he found any dwarf cultivars could he pick me up a seedling or so. Two weeks later one seedling appeared. Woo Hoo! My Clivia collection was up to 6 plants. Being a collection of only six plants means that they get more attention than the collections that have more numerous members. This little seedling was put in a 6-inch pot, watered and fed. I didn't expect flowers for many years.

The following spring I noticed two side growths coming off this very small plant and a flower spike forming in the centre of the plant. It was great! Not only had Rob found me a dwarf plant he found a micro-mini! Seriously, this plant was only 8 inches tall with 6 leaves on the main growth. I moved it to the greenhouse bench to keep it away from slugs and rabbits. This plant was going to bloom come hell or high water. Well, it did bloom but it wasn't a Clivia. The flowers were small and whitish pink. I called Rob asking if he knew what it was. He then called his friend, but as his friend was suffering from dementia he didn't remember Rob and couldn't remember that he actually grew Clivias. No luck there. Well, at least it was in the family Amaryllidaceae. That was a good start.

After a few unsuccessful tries I had luck. It was a Cryptostephanus. Great. Only three species in Cryptostephanus, thank goodness. Corona 6 segments, nope. Corona 12 segments, yep. Flowers darkly pigmented, purple to black, nope. Flowers pale, white to pastel pink, yep, C. vansonii!!!!! Easy. The species was only described in 1943. It is a narrow endemic that occurs in the Bvumba and southern Chimanimani Mountains of Zimbabwe. It grows as a lithophyte or a forest floor plants. The roots are very thick and covered with velamen (a spongy covering that holds water). The roots don't really penetrate into the soil but creep laterally through the leaf litter and mosses of its preferred habitat.

The Cryptostephanus species range in colour from white through pinks and purples to black-purples. It was originally thought that Cryptostephanus would breed with Clivia. The hybridizers hoped to introduce new colours into Clivia especially purples, pinks and whites. Well, it didn't work. They may be closely related according to the taxonomists and they even look it to the average Joe but obviously the plants can tell the difference. Until now there have been no successful hybrids. Avoiding the hand of the hybridist is not a bad thing. Maybe this is the way that Cryptostephanus thumbs its nose at we mere mortals!

One nice thing about this plant is that it has avoided recognition in the horticultural press and nearly every botanical work. This is surprising because it has very beautiful flowers followed by dense clusters of orange-red berries that hang on the plant until it flowers the following year. Flowering last for months, much longer than Clivia. I feel privileged that through a mistake this plant found its way into my collection. The original collector has gotten several crops of seeds from the plant he accidentally gave away. So has Rob. I saved several last year and sowed them around the parent plant. It took them 10 months but there are three baby Cryptostephanus coming up in the pot.

The picture below is what this plant looked like when it flowered this spring. Did I mention they are slightly fragrant? The whole plant is only about 30cm high and grows happily in a 8 inch pot. I can grow 6 of them in the space one Clivia takes up. As they say in California 'this is a keeper'.

BTW, the name Cryptostephanus means Hidden Crown, literally Crypto - hidden and Stepanus - Crown. The names Stephen, Steve, Stefan and Stephanie all come from the same derivation. The name refers to the small corona (petal appendages) at the summit of the tube of the flower. You can see them as little yellow or dark pink 'teeth' at the point where the petals form a tube in the flowers below. 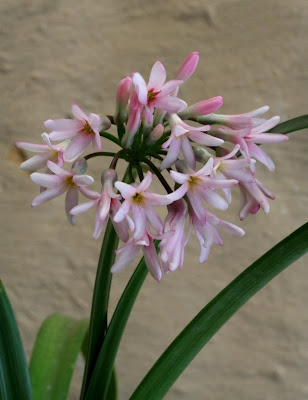 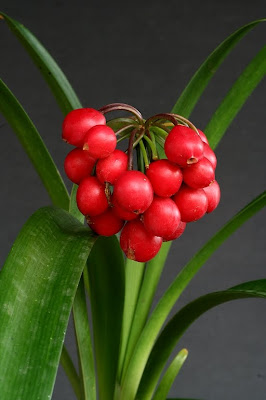 Thank-you for this wonderful, fascinating, sometimes funny and very amusing tale of Cryptostephanus. Your talent as a writer and chronicler is unsurpassed, and at once engaging! Thanks again.

PS...I forgot to mention how impressive the photos of Longwood Gardens conservatories are. Such a magical and inspiring place - and to think these photos were taken in the middle of a Philadelphia winter! Incredible.