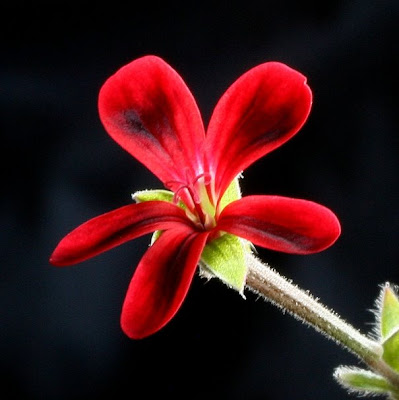 One of the real pleasures of lining in a Mediterranean-type climate is the ability to grow a huge range of plants from some of the most botanically rich regions of the world. This type of climate occurs in the Mediterranean (of course), parts of South Africa, Southern Australia and most of California. Temperature variations are much less pronounced in these climates than in the cool temperate and continental climates. The summers may be hot but it rarely truly freezes in the winter, so no need for long-johns here! Winter days, at least in my area, rarely drop below 12-15C even though night temps may drop down close to 0C. The differential between day and night temperatures in both winter and summer can actually be relatively large, 10-15C differentials not being uncommon with occasional larger gaps. Rainfall is relatively modest (620mm per year at my home) with a uneven distribution over the year, heavier and winter/early spring and very little in summer/early autumn.

The climate of my adopted home could not be farther from the northern temperate zone in which I grew up. Philadelphia, Pennsylvania, USA or 'Philly' has summers that are hot and steamy, more like the tropics but maybe a bit warmer. Summer nights, while slightly cooler than the days are still hot and steamy. Winters are cold with frozen ground and snow. The only way I could grow most of the Mediterranean-type plants was to put them outside in summer and in the basement, heated frames or greenhouse during the winter. For the majority of these plants this was a totally unsuitable arrangement. Being predominantly winter-growing plants, the hot, wet summers rotted most of them off when they were trying to rest. winter wasn't much better, either being cooped up in a dark, dank nearly sunless spot or in an enclosed, humid environment with not much more light than the basement in temperatures more like the tropics. where were the cool, damp winters and hot dry summers?

One plant genus we did successfully grow in Philadelphia was Pelargonium. The common species cultivated were mostly species in the section Ciconium, the normal Garden and Ivy-leaved Geraniums and the section Pelargonium, the Scented Geraniums and Regal Pelargoniums (in the USA they call Regal Pelargoniums, Martha Washington Geraniums). These are just two small sections in a huge genus of plants that contains hundreds of species ranging from those a few centimetres tall to large imposing shrubs to 2m tall. Some are geophytes, producing large underground tubers, others thich woody or succulent stems. While most produce 'normal' leaves, others have leaves so finely divided that all that is left of the leaf surface are the veins while others have lost their leaves altogether.

Plant fragrance is a notable characteristic in Pelargonium. The leaves of many have strong fragrances reminiscent of Apples, Oranges, Limes, Lemons, Coconuts, Mints, Roses, Anise, Celery, Camphor or Balm. Some combine the above scents, like lemon-rose, Camphor-rose and mint-rose. While many are pleasantly fragrant, several smell like insecticide or burning hair or plastic. The flowers, while generally not fragrant, occasionally surprise the flower by emitting powerful fragrances. One species in particular, Pelargonium gibbosum, the Gouty Pelargonium (so named because of the lumpy 'swollen joints' of the stem) has the most remarkable fragrance of them all. The flowers lack the showy colours of many of its relatives, being mainly green, sometimes with indistinct brown or reddish dots at the base of the petals. The drabness of the flowers is made up for just before dusk during the flowering season (late spring through autumn). You may not even realise the plant is in flower until you get home late from work one night and smell bananas. That's right, bananas! Remember those banana marshmallow candies in the 1960's and 70's? Dense marshmallow, artificially flavoured banana and molded into the shape of little bananas about 3 inches long. the flowers of Gouty Pelargonium have the exact frangrance of these retro-candies and extremely strong to boot! The flowers of this fascinating plants are pictured below.

By far what attracts most people to these beautiful plants are the colours of the flowers. the range is truly amazing. While mauves, pinks and whites are the predominant colours, greens, yellows, browns, oranges, reds and vivid purples are also in the colour palate. The only colour that does not exist in Pelargonium is a true blue. You need to go to the related genera Erodium and Geranium for true blue. Interestingly, most Pelargoniums have flowers that combine a range of colours in the same flower. It is not unusual to get red, yellow and white in one flower, or white pink and red, or oange and pink, or green and red, the list goes on.

One of the most interesting things about Pelargoniums and the Geraniaceae in general, is the way that they are pollinated. A few are bird pollinated, like Pelargonium fulgidum. but this is rare and pretty much limited to the red-flowered species. A hybrid of P. fulgidum (P. Scarlet Unique) exhibits the qualities of a bird-pollinated Pelargonium. The brilliant red flower with a wide open gap in the the middle of the flower. This bright green gap screams out to the bird 'put your beak here!'. A few of the species are moth pollinated, having white or green flowers and emitting their fragrance at night (P. Gobbosum). Most of the Geranium family are, however, pollinated by bees or flower wasps. The bee/wasp pollinated species for the most part are not fragrant but do provide a nectar reward to the insect. Nothing spectacular there you say? Well, Pelargoniums, Geraniums, Sarcocaulon and Erodium leave nothing to chance when ensuring that the insects know exactly where the nectar reward is and how to enter the flower to get it.

The highly successful Geraniaceae, employ what are called nectar guides. You can clearly see them in most of the pictures below. These nectar quides appear as solid or spotted lines generally on the upper petals of Pelargonium but commonly on all the petals in the genera with regular flowers, Geranium, Sarcocaulon and Erodium. By the way, one of the ways to distinguish Pelargonium ffrom these other genera is by the construction of the flowers - they are zygomorphic. Zygomorphic simply means that the flowers can only be cut in half one way to get two even halves. In Pelargonium this is usually vertically through the centre of the flower. There are five petals in the flower, two produced north of the flowers equator, three below. While the nectar guides are clearly visible to the human eye what must they look like to a colour-blind bee? Thankfully, this has been studied and here are some wonderful infra-red pictures of Geraniaceae on the 'net. These pictures clearly show how stunningly distinct these nectar guides are to a bee!

The orchid flowers around the house are a bit sparse on the ground at the moment so I thought I would turn to the Pelargoniums for a bit of camera fun. Instead of taking pictures of full plants, it was more fun for me to take close-ups of the flowers. The colours are wonderul and provide a real challenge to the photographer to capture them accurately. What is not immediately evident is that even in the plants that do not appear to have nectar guides, like Pelargonium 'The Boar', have veins a different colur to the base colour of the flower which under infrared light stand out as strongly as the nectar guides that are obvious to our eyes.

The majority of Pelargonium species come from Africa, with the greatest concentration in southern Africa. A couple occur in the Mediterranean and a dozen or so are from Australia. Africa and Australia share many Families, Genera and species of plants. From a biogeography point of view this is fascinating and maybe should be the subject of a post? Below is just a small selection of Pelargoniums that are flowering in my garden. These photos were taken on the 11th of January (our mid-summer). 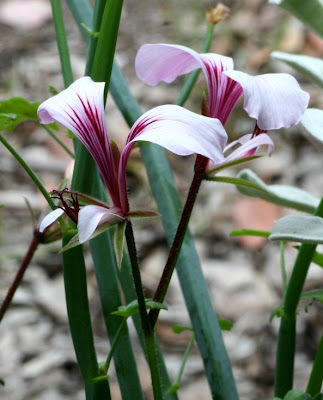 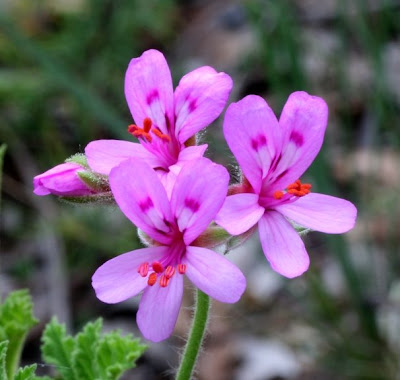 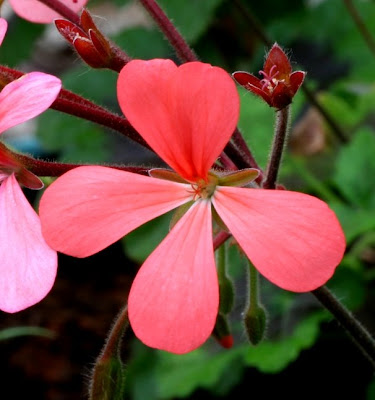 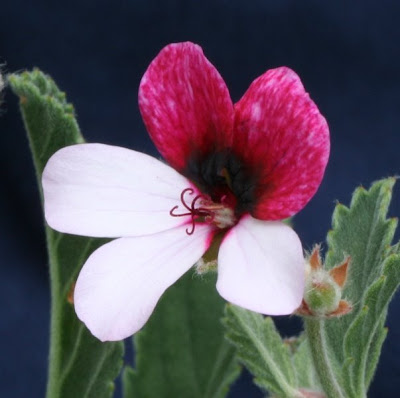 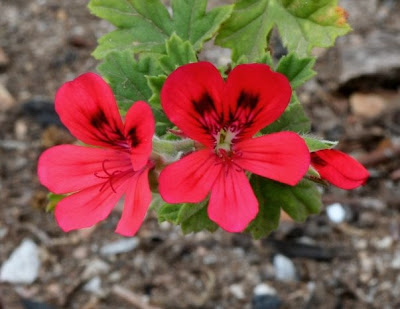 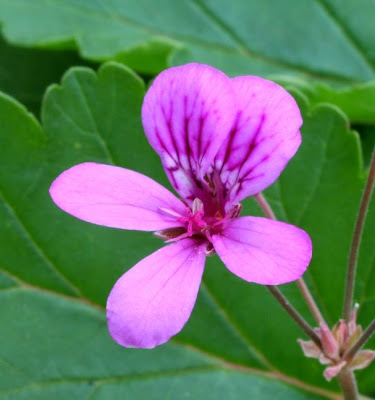 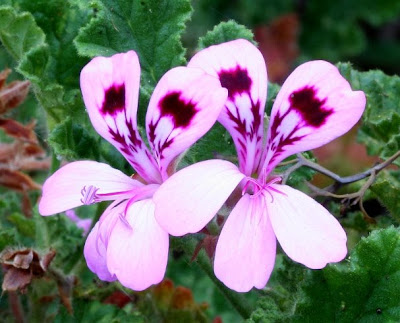 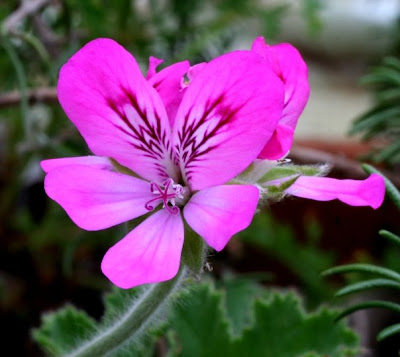 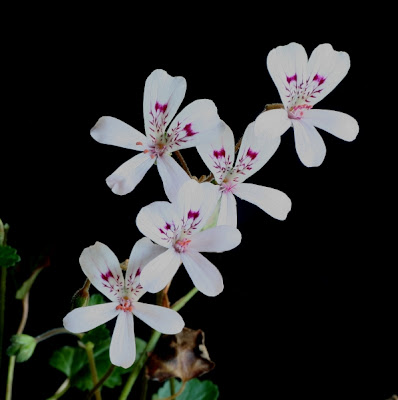 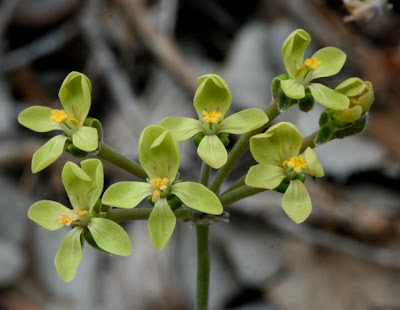 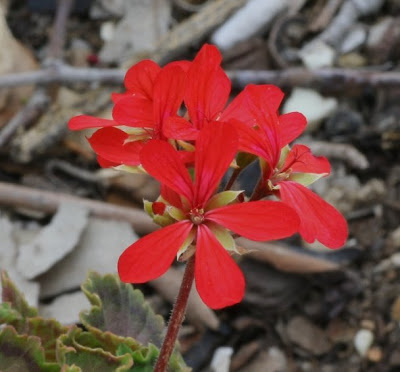 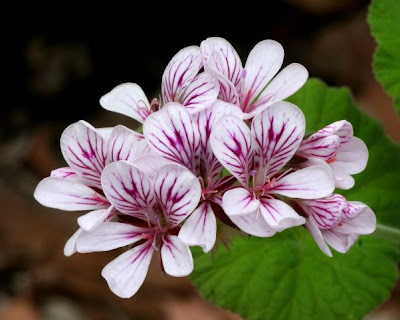 Pelargonium australe (Australian Native)
Posted by Chuckie at 1:45 AM

Thank-you for a wonderful post! The Pelargoniums you speak of are truly amazing, the Gouty Pelargonium is my absolute favourite: the one in my garden has a scent that reminds me of bubble-gum! Love ya work!

The cultivars are stunning but I still have a soft spot for that delicate little native at the end.